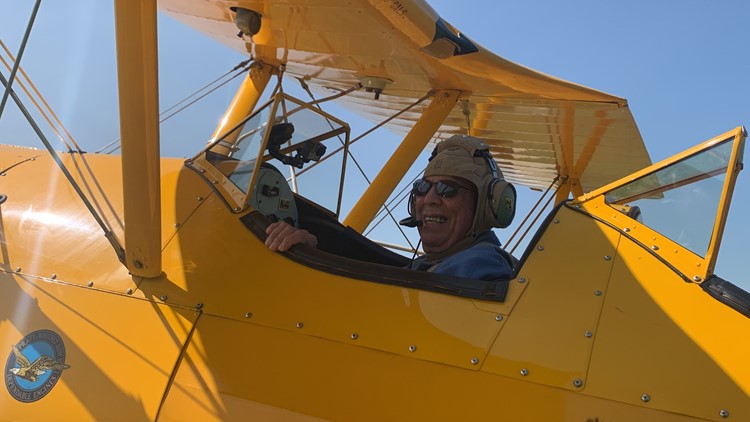 John Haynes learned to fly a Boeing Stearman airplane as a Navy pilot during World War II. For his 99th birthday, he got back into a familiar seat.

NOBLESVILLE, Ind. — On John Haynes’ 99th birthday, there was all the usual celebrating with friends, family and cake.

But the icing on that cake came in the form of a very special gift at the Noblesville Air Field.

“Let’s make our way up here,” said Haynes’ son, Robert, as he and a group of others helped the birthday boy into a 1941 Boeing Stearman airplane.

This was not just any flight, though. Haynes was about to climb into a very familiar seat.

“I love flying!” exclaimed Haynes. I got my wings in the Navy.”

Haynes learned to fly in a Stearman along with other Navy pilots training to fight in World War II. Local pilot Trip Kelleher owns one and was honored to take Haynes up.

“Both of my grandfathers fought in World War II, and so I was always in awe of them,” Kelleher said. “It’s just really sad that we’re losing them at such a high rate. (Haynes) is the first WWII veteran I’ve ever had the chance to fly, and I’d like to honor them any way we possibly can.”

Kelleher is part of Indy Biplanes, made up of a group of pilots who provide charity flights and flyovers, and participate in veteran funerals and other events.

What does it mean for Haynes to be up in the air for his birthday at 99 years old?

John didn’t just go along for the ride, either. Apparently, some things you just don’t forget.

“He flew like an ace!” Kelleher said. “He shook the stick, was ready to take over the controls and flew around for quite a while and just did beautifully. He was in great command of the airplane.”

“That was fantastic! I love this airplane,” John exclaimed as they landed. “It was like old times.”

For his son Robert, who is also a pilot, it was just as special.

“He was my flight inspector. He taught me to fly,” Robert said. “He passed the legacy on.”

After his military service, John spent his career with the Federal Aviation Administration — first as an air traffic controller and then as an inspector.

“(It’s important to) look at our seniors with value,” Robert said. “They’ve still got an awful lot to teach us. You see stories and cartoons of an old man with a walker, and you don’t realize that man — back in WWII — was a lean, mean, fighting machine. It’s just that time and age have taken their toll. But let’s respect our seniors. They are amazing people.”