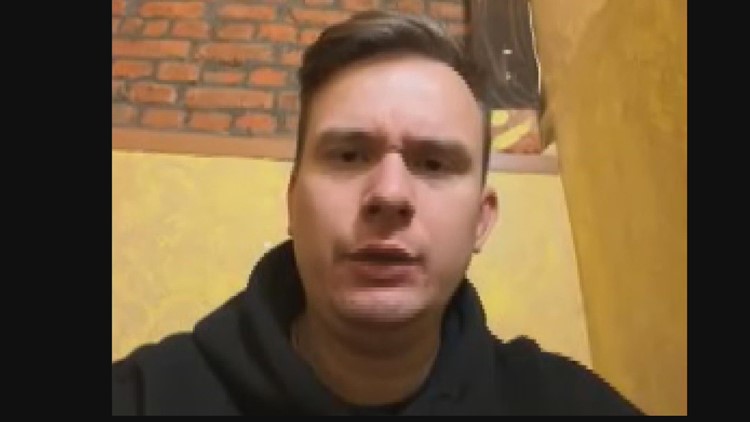 Oleksandr Ivaskych wants his wife and mom to go to Poland where it’s safer, but they refuse to leave him behind.

LVIV OBLAST, Ukraine — With every day that passes, with every missile strike on Ukraine, the uncertainty for its people, only gets worse.

“We do not know if the missile is flying to our city or the neighboring one,” said 33-year-old Oleksandr Ivaskych.

Since the start of the war, more than a month ago, Ivaskych has felt every emotion.

“For the first two weeks, I was scared. Currently, it’s like I’ve adapted to this,” he explained.

The emotion gripping Ivaskych now though, is just as unsettling.

“It brings the worst feeling possible, the hatred,” he said.

Ivaskych only knows the bombs are the reason he, his wife, and mother fled their home in Kyiv to western Ukraine.

“It was a horrible journey, but it started at the train station that looked like a moment from a film about the zombie apocalypse because there were a lot of people all over crying,” Ivaskych said.

“A lot of children, women,” he added.

Ivaskych wants his wife and mom to go to Poland where it’s safer, but they refuse to leave him behind.

They’ve spent nights crouched in an underground bomb shelter together.

“I cannot leave my country in such hard times despite the fact that everybody is working on our victory,” said Ivaskych, explaining he’s trying to do his part.

Ivaskych’s a psychologist and is counseling refugees, like one young woman he remembers, who, like so many others, have already seen the horrors of war.

“In Harkyiv, she also saw the bodies of the bombed people and the children’s’ bodies and in the train some of the refugees were in such a desperate state that they have had panic attacks and attacked other people,” he recalled.

Ivaskych fears conditions will only get worse and the war will reach beyond Ukraine’s borders.

“The next bombs will fall on Poland, Lithuania and the other neighbors of Russia,” Ivaskych said.

For now, he only sees the innocent people dying, for a belief Ivaskych said is more important to them, than their own lives.

“We’ve spilled our blood for our freedom,” he said.