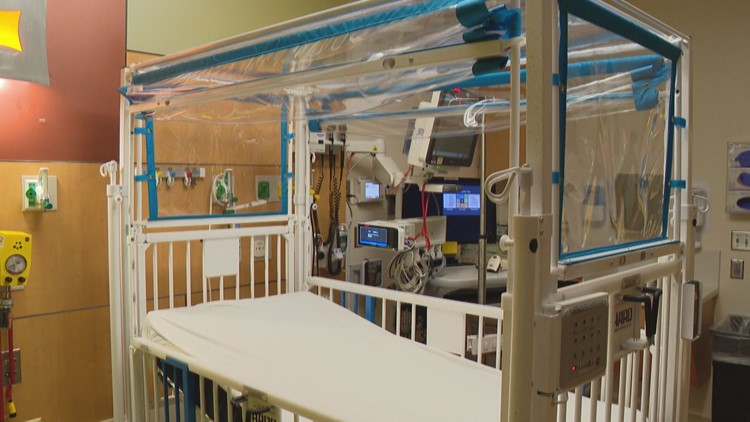 So why the unseasonable spike in cases? One doctor said COVID-19 is likely to blame.

“This is very unusual for us,” said Dr. John Christenson, associate medical director of infection prevention at Riley.

RSV normally packs its hardest punch in the winter months, particularly in January, but now it’s popping up mid-summer.

“In June, we almost never saw bronchiolitis. Now you hear of children in our emergency room with bronchiolitis being admitted to our floors. We’ve also had cases of children who are immunosuppressed, immunocompromised coming down with pneumonia,” Christenson said.

Infants and young children are being admitted to Riley, some even to the intensive care unit.

RSV and bronchiolitis, an inflammation in the lungs, is common, according to Christenson. Almost every child is likely to get one or the other by the time they turn two years old.

RELATED: Yes, the FDA has authorized COVID-19 vaccines for kids as young as 6 months old

But for young kids, it’s serious and sometimes fatal.

“So it’s very, very common,” said Christenson. “Now the good news is that you and I come down with RSV, it will give us a bad cold, right? However, if you’re a very young infant, it can put you in the hospital with pneumonia.”

So why this unseasonable spike in cases?

“We had a season where we had no influenza, we had a season when we had no RSV and a lot of other respiratory viruses like parainfluenza, adenovirus basically disappeared,” he said. “When mask use started relaxing and lockdowns started being taken down, then we started seeing activity once again on all these.”

With COVID-19 now moving toward endemic levels, Christenson said it’s very possible these unseasonable spikes in viruses and illnesses will only continue, just like they’re seeing now with RSV.

“We may end up seeing these patterns being the new norm, right? We’ll have to see,” said Christenson.

Doctors say a vaccine to prevent kids from catching RSV is in the works but isn’t completed or available yet. Parents should instead focus on prevention when it comes to keeping children safe.

Doctors say hand washing is the best thing to do, but masking up near babies, gathering outdoors when in groups and avoiding smoking in the house with an infant can help keep kids safe.

“But you need to do everything to protect that baby, especially those under six months of life,” Christenson said.