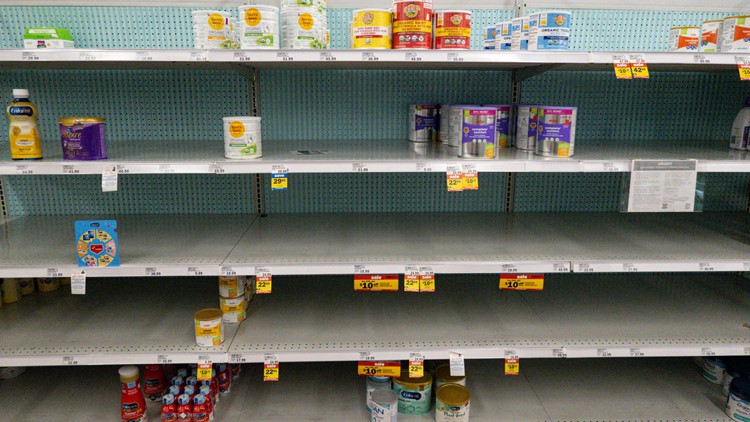 Amy David, clinical associate professor of supply chain management, predicts there will be tight supply on shelves through at least the end of the summer.

INDIANAPOLIS — It has been one month since an Indianapolis mother decided to launch an online resource for families challenged by the baby formula shortage.

“People, more or less, were asking for the formula that they were looking for, or where they could find the formula,” said Antrobus. “So that was a big one, but then you also had a big wave of people willing to help saying, ‘Hey, I saw this formula here,’ or, ‘Hey, I have this formula.'”

The group now has more than 1,100 members, both giving and receiving formula.

“Unfortunately, as we know altogether, it’s still obviously a struggle,” said Antrobus. “This wasn’t a complete fix-all for everyone to get the formula they need, but I do believe that is has definitely been helping.”

She said just because Abbott has reopened its formula manufacturing facility in Michigan doesn’t mean it is a quick fix to the shortage.

“Things need some time to proliferate through the supply chain,” said David.

In fact, David predicted there will be tight supply on shelves through at least the end of the summer.

“If we want to be sure that there is always enough baby formula,” said David, “that means building in some redundancies and deliberately adding things that are going to add cost to the supply chain but would hopefully prevent there for being a big crisis if there is a single point of failure.”

In the meantime, Antrobus maintains the online help group.

“Just as a place for people to always be able to go to help get and/or give formula away if they need to,” said Antrobus.

She said she plans to keep the group going indefinitely as a resource for future families.

“There are so many people always willing to lend a helping hand,” said Antrobus. “That is so amazing to see.”

Another way to help, according to Antrobus, is by taking a picture of the formula stock at your local store and posting it to social media. She says that can be an easy way to quickly reach local families in need.