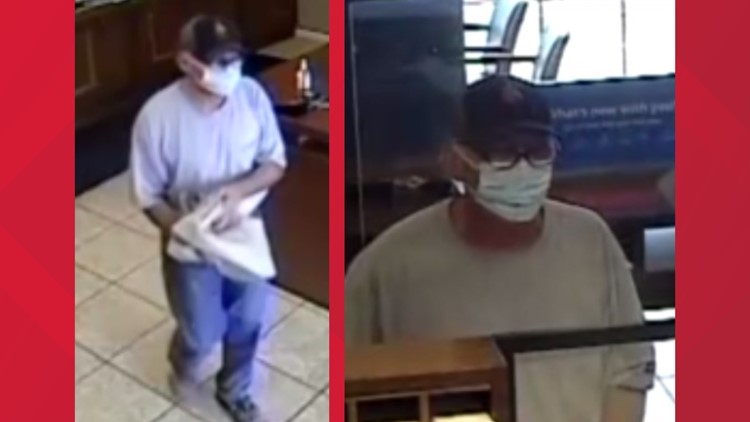 Richmond is the latest city to be hit by a bank robbery. Anderson, Indianapolis and Martinsville all reported armed bank robberies in the last month.

RICHMOND, Ind. — Police are seeking a suspect in yet another armed bank robbery, adding to a series of recent robberies that have police in several Indiana cities asking the public for help tracking down those responsible.

Police in Richmond, Indiana, are looking for a man in his 50s who’s accused of robbing a bank located at 2101 Chester Boulevard, which is the address for a Chase Bank.

The man went into the bank at around 3:30 p.m. Monday. He handed a bank teller a note saying he was armed and demanding money.

The man escaped with a plastic shopping bag full of money that he put into a canvas bag as he ran away. Police say he didn’t pull out a weapon during the robbery and he escaped on foot, not by car. Police did not say how much money the man got away with.

The man is about 5 feet, 6 inches tall. He has white hair and a slender build. In photos from the robbery, the man is wearing a gray shirt, blue jeans and a white surgical mask. Police added that he was also wearing tennis shoes and a tan and black hat.

Anyone who recognizes the man or has any information about the robbery, is being asked to call the Richmond Police Department Investigative Services Division at 765-983-7247.

This is the fourth armed bank robbery that’s happened in the area over the last month.

On Friday, just three days before the Richmond robbery, a man robbed an Old National Bank in Anderson. He used a similar tactic, handing the teller a note and demanding money.

Police described the suspect as a man in his 20s and said he was armed. He also wore a hat and a surgical mask during the robbery.

Anderson police told 13News on Tuesday that no arrests have been made in this case yet.

The FBI Violent Crime Task Force and IMPD are asking for the public’s help in identifying a man who’s accused of robbing a bank on the city’s south side.

Witnesses described the suspect as approximately 40 to 50 years old with a stocky build.

RELATED: Police looking for man who allegedly robbed bank on Indy’s south side

A man accused of robbing a Citizens Bank in Martinsville on Friday, May 13, was arrested the day after the alleged robbery.

The man robbed the bank at around 3 p.m. He left with an unspecified amount of cash and then got away in a white car.

During their search for the man, police shared several photographs from the robbery, including pictures of the suspect and vehicle.

He was located early the next day and, at the time of his arrest, police said a “significant portion” of the money he stole was also recovered.