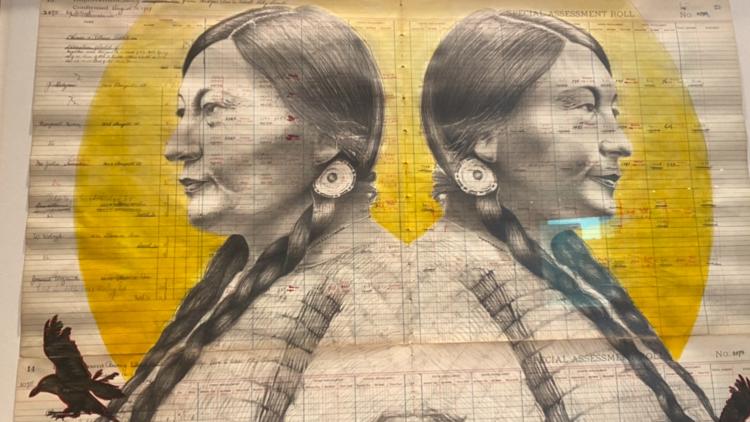 For over 30 years, Native American art galleries at the Eiteljorg Museum were organized by geography and time period. A new exhibit recenters Native perspectives.

INDIANAPOLIS — A new $6 million installation at the Eiteljorg Museum aims to present Native American art from the perspective of Native people.

In museums across the country, Native art is often – and erroneously – placed within an anthropological or geological context in a way that can both erase the contemporality of the piece, or place it out of context.

For decades, Native tribes and organizations have worked to bring cultural institutions like museums to task for lack of Native curation with galleries containing art made by Native American people.

The exhibit that had been in place at the Eiteljorg for 30 years did not, Native staff at Eiteljorg felt, accurately represent the world view of artists who created the work.

“Our Native curatorial staff felt very strongly we needed to take a different approach. That we needed to look at the art, and the stories, from a Native perspective,” said Elisa Phelps, vice president and chief curatorial officer at Eiteljorg.

The new exhibit, Expressions of Life: Native Art in North America, places various art pieces “in conversation” with one another, and is arranged around three primary themes – relation, continuation, and innovation. Museum curators worked to reiterate the overall point that Native artists have existed for thousands of years, and continue to innovate within new art spaces.

“These things are still being made. It’s not like you won’t ever see these things again,” said Dorene Red Cloud, associate curator of Native American art, who helped put the exhibit together.

At the exhibit’s entrance, the museum coordinated with Native tribes in Indiana to record greetings in various languages.

Land acknowledgements stating that the museum sits on land belonging to Miami, Potawatomi, Lenape, Shawnee, Kickapoo and Peoria people, are placed at the throughout the exhibit to emphasize Indiana is the ancestral homeland of these tribes.

“These people have made this their homeland for centuries, for millennia. And they’re still here today. We will always recognize this as their lands first,” said John Vanausdall, president and CEO of Eiteljorg.

You can get your first look inside this exhibit on Saturday, June 25, which coincides with the 30th Annual Eiteljorg Indian Market and Festival happening at the museum.