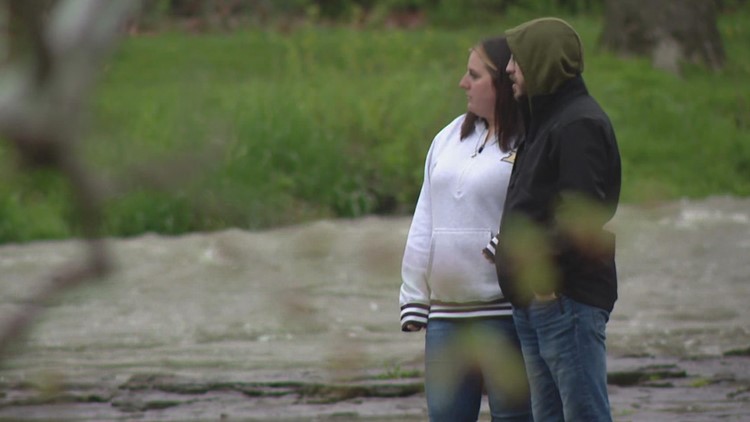 When Logan Norrad saw a child struggling in a strong Fall Creek current, he thought to himself, “I have to go now.”

NEW CASTLE, Ind. — A water rescue in a Madison County park has prompted a safety warning as we head into the summer months.

It’s important information for parents after a boy – and his rescuer – narrowly escaped a close call with a strong current.

“At the time, it was a lot more shallow and it wasn’t as strong,” said Logan Norrad, pointing to the swollen creek at Falls Park in Pendleton after several days of rain.

Logan is talking about Fall Creek. Two weeks ago, he and his wife, Emily, were at the park and saw a young boy swimming upstream and getting caught in the current.

“He just kept going and he was yelling for help,” Logan recalled.

Seconds later, the boy was going over the falls.

“It just sucked him straight under and he was gone for like 30 seconds, maybe, then he came back up. I could tell he was conscious, and he was yelling and asking for help, and that’s when he went back under,” said Logan.

“I looked over at my husband and said, ‘Is he going to die?’ And we saw him pop back up and my husband jumped,” Emily said. “It didn’t surprise me he was going, but just the fact that he didn’t know if he was going to make it with this little boy.”

“I was like, ‘This is it or it’s not going to happen. I have to go now,’” Logan said he thought to himself. “I jumped out about 10 feet to him, and by the time I got to him, he was exhausted.”

Logan was also tired, after swimming back to shore with the boy, fighting the current the entire time.

“It was beating us up. It was trying to pull us under, and it was shallower than it is now,” Logan said.

The couple called police after no one in the park claimed the young boy. The Norrads still don’t know his name.

Almost two weeks later, the couple said a new sign is up at the park, warning visitors about the dangers of swimming in the creek.

“It’s cool to look at, but to get near it and being in the water is a whole other perspective,” said Logan.

It’s something Logan won’t soon forget and folks in New Castle, where the Norrads live, don’t want to forget either. At their next meeting, the city council is going to recognize Logan for his heroism

“I would do it again,” he said. “I try to help everyone in my life the best I can with everything.”

The Madison County Prosecutor’s Office is looking at what happened and will decide whether the boy’s father should be charged with neglect of a dependent child.