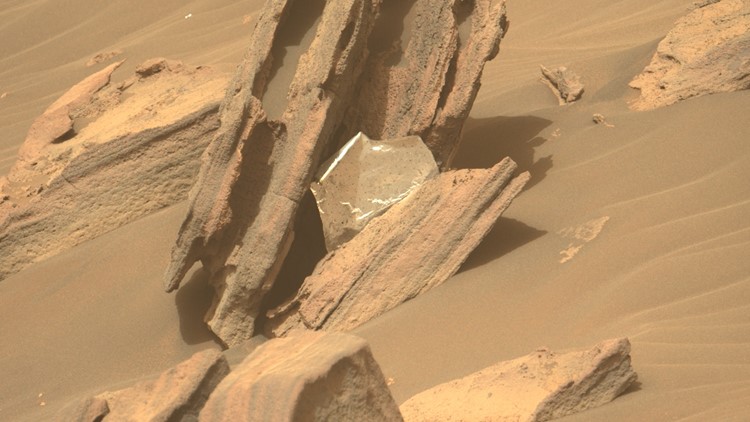 There’s a simple explanation for the stray piece of foil spotted in Perseverance’s photos.

The scrap of material wouldn’t be out of place near a Chipotle back on Earth, but it did look a bit odd caught on Mars’ barren surface. NASA shared the photo on social media and explained that it was “something unexpected,” but there’s a simple explanation.

The shiny scrap is believed to be part of a thermal blanket, which NASA scientists wrap around spacecraft to regulate temperature in the extremes of space. NASA said it may have torn free from Perseverance’s “rocket-powered jet pack” during its descent stage in 2021.

Finding materials from the descent stage wasn’t the “unexpected” part — it was the location.

“It’s a surprise finding this here: My descent stage crashed about 2 km away,” Perseverance’s official Twitter account said. “Did this piece land here after that, or was it blown here by the wind?”

That shiny bit of foil is part of a thermal blanket – a material used to control temperatures. It’s a surprise finding this here: My descent stage crashed about 2 km away. Did this piece land here after that, or was it blown here by the wind? pic.twitter.com/uVx3VdYfi8

Perseverance, the biggest, most advanced rover ever sent by NASA, became the ninth spacecraft to successfully land on Mars in February 2021. It touched down near an ancient river delta, setting off to collect rock samples and search for signs of life from billions of years ago.

NASA has two other functioning spacecraft on the Martian surface — the Curiosity rover and the InSight lander.

While the nuclear-powered Perseverance and Curiosity are still going strong, the solar-powered InSight made headlines earlier this year because of its imminent dusty demise. Thanks to Mars dust gathering on its solar panels, InSight is expected to lose power for good this summer.

RELATED: Thanks to Mars dust, NASA lander doesn’t have long to live