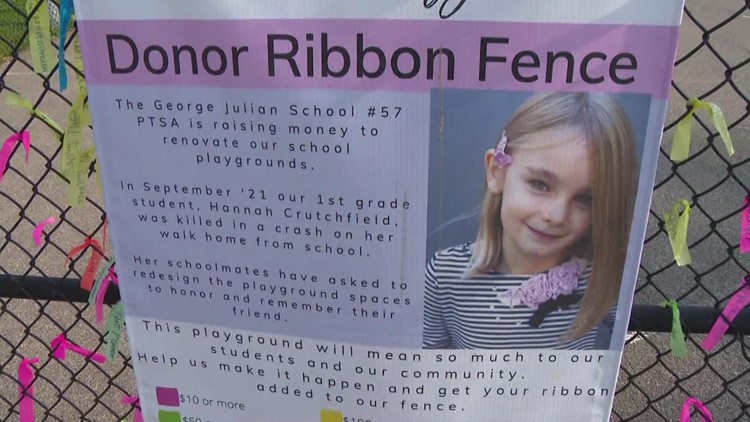 Hannah Crutchfield died last September after she was hit by a car while walking home from school.

INDIANAPOLIS — A playground to honor Hannah Crutchfield is still in the works at IPS School 57.

Hannah was killed in September after she was hit by a car while walking home from school.

Organizers say they still need the public’s help to build Hannah’s Memorial Playground. They have managed to raise $88,000 of their goal of $200,000.

“She was fun, adventurous and kind,” Cassandra said of Hannah. “She’s gone because of road rage and reckless driving.”

Cassandra was at the school Wednesday, along with school, city and state leaders, to discuss just how important this project is to this Irvington community.

Lt. Gov. Suzanne Crouch announced that if the community can raise $50,000, there will be a match provided from “Our Creating Places,” a campaign through the Indiana Housing and Community Development Authority.

If that happens, the playground will come to fruition.

Cassandra spoke Wednesday about the need for improved safety. She doesn’t want what happened to her 7-year old daughter to happen to anyone else.

“I know we are not the only community grieving the loss of a child, a sibling, a loved one, due to unsafe roads,” she said. “Things need to change. We need to prioritize pedestrian and cycling safety, not just here in Irvington but all over our city.”

Cassandra said she’s been at the Statehouse, advocating for improved laws to protect pedestrians.

Officials said there were 171 crashes that involved pedestrians or cyclists in 2021.

The playground project is the brainchild of Hannah’s fellow students.

“This project came from our students in their time of grief, as they processed Hannah’s death,” said Michelle Pleasant, PTA president. “They were looking for ways to honor her.”

Students got to pick the playground’s colors: yellow, gray and two shades of blue.

Pleasant joined others in the call for safer streets.

“We want to see changes made to prevent these fatal crashes and protect people, and our current system is not working,” Pleasant said.