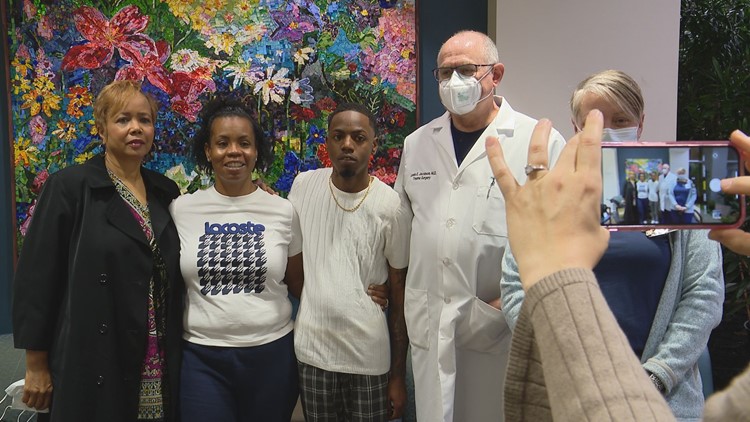 Daewoo “Skooter” Thompson will be featured in a Versiti Blood Drive at Ascension St. Vincent Hospital on 86th Street on Tuesday, April 26.

INDIANAPOLIS — Last May, Daewoo “Skooter” Thompson was injured in a life-threatening crash near Cicero on U.S. 31.

“It was me and two other friends,” said Thompson. “I had a friend in the passenger seat and another behind me in the back seat when the car flipped and all that. When the car hit a pole, I don’t know what happened after that.”

Thompson was ejected from the car and seriously injured.

Thompson was rushed to the hospital.

“I was losing so much blood and they really couldn’t figure out where it was coming from, and they couldn’t stop it,” said Thompson. “They didn’t know what to do at that point.”

“Without the blood transfusion, I think he would not have been where he is today,” said Dr. Lewis Jacobson with Ascension St. Vincent’s Trauma Center.

Thompson was able to hang on thanks to his doctors and blood donors.

“One of the largest transfusions, I think that we’ve ever seen,” said Jacobson. “More than 100 units of blood products and then continuing to stay probably at least another 100 units over the course of his stay.”

“I could have, should have, been dead actually,” said Thompson.

His full recovery shocked everyone except his mother.

With a new lease on life, Thompson has a brand new outlook to go with it.

“I wake up and thank God every day,” he said.

Thompson will be featured in a Versiti Blood Drive at Ascension St. Vincent Hospital on 86th Street on Tuesday, April 26. He’s participating to pay it forward after so many blood donors saved his life.