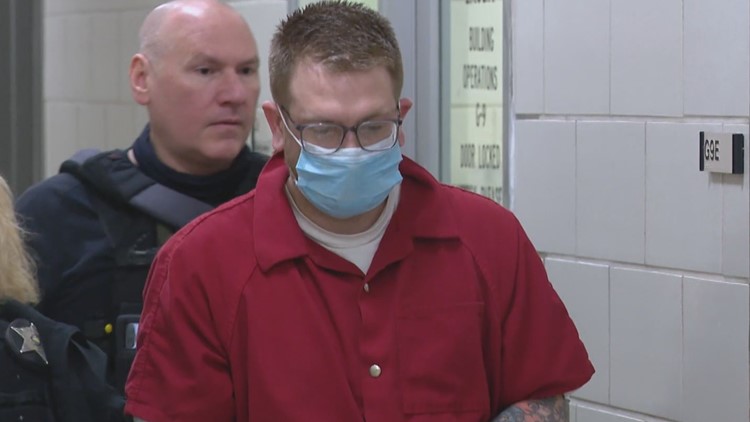 Jason Dane Brown had been found guilty of a murder charge in the deadly shooting of Lt. Aaron Allan on July 27, 2017.

INDIANAPOLIS — Nearly five years after Southport Lt. Aaron Allan was shot and killed, Jason Dane Brown was sentenced Friday after being found guilty in his murder.

Brown will spend 58 years, with three years suspended, for the deadly shooting of Allan on July 27, 2017. He was also sentenced one year for marijuana possession, which will be served concurrently.

(NOTE: The above video is a previous report from when Brown was found guilty of Allan’s murder.)

Allan was killed July 27, 2017, while he and an officer with the Homecroft Police Department were responding to a crashed car near Madison Avenue and Maynard Drive.

Allan, 38, was reaching in to help Brown when Brown started shooting. Witnesses said Brown continued to fire even as Allan tried to crawl away. Investigators said Allan was shot 11 times.

Other officers who had responded to the scene returned fire, shooting Brown in his face and neck.

Brown was found guilty of a murder charge in the deadly shooting in February. The prosecutor’s office had been seeking the death penalty, but it was removed after Brown asked to waive a jury trial. The judge then ruled during the trial that the prosecution had not established evidence for a life without parole sentence.

During Friday’s sentencing hearing, the defense gathered family members and friends to speak on Brown’s behalf.

Cierra Brown, Jason’s older sister, was present at the hearing and described their childhood about constantly moving, their mother using drugs and their father in prison.

“I know Jason’s heart. I know that day was tragic for everyone in Indianapolis. I know he wasn’t in his right mind. He wouldn’t hurt anybody,” Cierra told the judge.

Teresa Brown, Jason’s mother, said she didn’t know how the accident happened because Jason “was the most cautious driver. We called him a ‘granny driver.'”

“He wishes he could tell them how sorry he is. He wishes this never happened. He wishes he never went out that day. All he keeps saying is he’s sorry,” Teresa said at the sentencing hearing. “It’s not who he is. He’s so caring, thoughtful, loving and funny.”

Then, the prosecution had Allan’s family members and friends speak about their tragic loss.

James Allan, Aaron’s father, directly addressed Brown and said, “You knew what you were doing. My son was there to help you, and you took his life. It was your choice. None of us should be here today, but those were your actions.”

After hearing from people on both sides, Brown cried while he read a prepared statement: “I’m sorry to the family, friends, co-workers. I woke up that day and didn’t intend to harm anyone.”

Brown said he grew up without a dad and promised to be the best dad he could be. He said he can’t be that now and knows he’s the reason Allan can’t be the father to his son either.

After a break for lunch, Judge Mark Stoner said Brown’s history of brain injuries and remorse shown were mitigating factors in the sentencing. However, Stoner said Brown should have never been driving with his head injury history or had access to a gun due to his mental health issues.

“There is nothing you can do to bring Lt. Allan back, but there are positive things you can do for your son and your community,” Stoner told Brown before issuing the sentence. “You will serve a significant penalty, but you have to forgive yourself and make something positive out of your life.”

According to Stoner, circumstances that led to his sentencing decision included firing 18 shots, hitting Allan 11 times, and killing a police officer, as well as Brown not seeking treatment for known head injuries and mental health issues for fear of losing his driver’s license or his drug use being discovered.

“The sentence imposed today provides finality to the criminal matter and our thoughts remain with Stacy, the family, and the Southport Police Department during this difficult time. We will continue to honor the legacy and sacrifice of Lt. Aaron Allan,” Prosecutor Ryan Mears said in a statement.

Allan’s parents also spoke with 13News after the verdict.

“The judge definitely was listening, as convoluted as this case has been, and the extent of the roller coaster ride that we’ve been taken on, I’d like to feel that justice will be served,” James said.

“I’m thankful for the judge at least giving us this. Hopefully, he’ll never see the outside of the bars ever,” said Laurie Lowry, Aaron’s mother. “I miss him as much today as I did the day he died. But hopefully now Aaron can rest.”

Allan was laid to rest Aug. 5, 2017. Allan, a 20-year law enforcement veteran, had served with the Southport Police Department for nearly six years. Allan left behind his wife and children. Allan had walked his son, Aaron Jr., to the bus stop for his first day of kindergarten on the day he was shot and killed.

Brown was taken to the hospital and was arrested after recovering from his injuries.

His past criminal history includes a 30-day sentence for possession of a controlled substance. He was also convicted of driving on a suspended license.

In closing arguments during the murder trial, the prosecution argued Brown was likely on drugs when he shot and killed Allan.

The defense argued Brown had suffered a seizure and was not in control of his actions.

The judge ultimately decided that, while Brown may or may not have known Allan was an officer, Brown knew what he was doing when he pulled his gun and fired it multiple times.