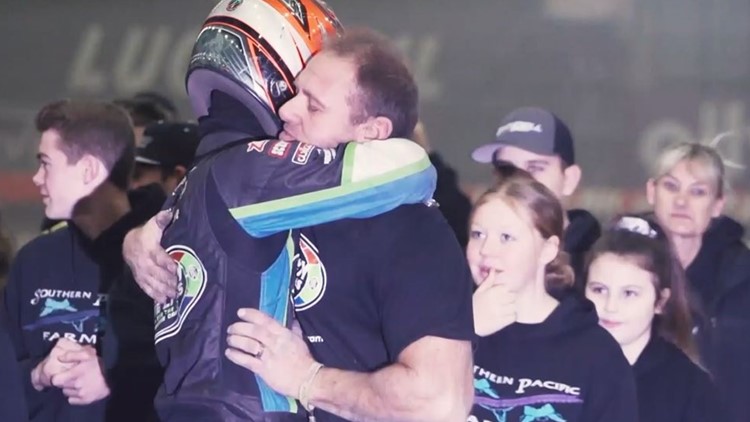 Emerson Axsom has been winning trophies in racing for the last 12 years, which is even more incredible when you consider he’s only 17.

FRANKLIN, Ind. — The month of May is all about racing here in central Indiana, and racing has been a huge part of a certain champion driver from Franklin, Indiana.

Emerson Axsom has been winning trophies in racing for the last 12 years, which is even more incredible when you consider he’s only 17 years old. But for Emerson, racing is all about family, even when he was holding the checkered flag as a 5-year-old.

“My first win, I was pretty mad after the early race in the night, and my dad kind of got on me and said,’ If you’re gonna be upset, then do better!'” Emerson said. “Later on that night, we got our first win and from there, I was kind of hooked. I just hate to lose.”

Emerson races 600 micro sprints, midgets and sprint cars. The Axsom family is all about racing — and winning.

Emerson’s dad, Joe, was a driver growing up, so when Joe married Jenny, who both went to Franklin High School, they started a family, and racing was destined to be part of the equation.

“Probably the biggest thing I do tell him is to be prepared and get your stuff ready,” Joe said. “You don’t have to get prepared if you are prepared.”

Emerson has won his more than 70 races in the past two years of micro racing, and he always celebrates first with family.

Emerson’s proud papa, Joe, is always right there to embrace his teenaged driver.

“Usually, he’s the first person to hug,” Emerson said. “He usually says ‘Good job, buddy!’ Or ‘I’m so proud of you!’ That’s my favorite.”

Emerson also went to Franklin Community Schools, but as a junior in 2021, he had to switch to home schooling because of his busy racing schedule.

Emerson has a list of accomplishments, but there’s one thing this 17-year-old could not do this year: prom.

“I missed it for a race,” Emerson said. “I mean, I would rather be at the race track.”

Emerson’s dad is not the only family member in awe of his son’s abilities.

“There are no words to explain how proud I am of my son,” Jenny said.

“Probably what I’m most proud of is the consistency and ability to prove himself on and off the track to be hired by a professional team,” Joe said.

“I noticed Emerson in some of the local races, and I started paying attention to him,” Clauson said. “There’s a huge race in Tulsa, Oklahoma, kind of the Indy 500 of micro racing, and he actually went down and won.”

As the team owner, Clauson is also all about family. Tim’s son, Bryan Clauson, raced in the Indy 500 on three occasions before tragically dying in a crash six years ago at the age of 27.

“The love that Bryan and I had in this sport wasn’t just his successes behind the wheel,” Clauson said. “We always had this love for the development of the next generation of the sport.”

Clauson said Emerson’s behavior both on and off the track show he has a bright future ahead of him.

“Whether he decides that he wants to go NASCAR racing or he wants to run IndyCars in the Indy 500, I think whatever he wants to do is reachable.,” Clauson said.

As for Emerson’s goal, he wants to make it big on the World of Outlaws circuit.