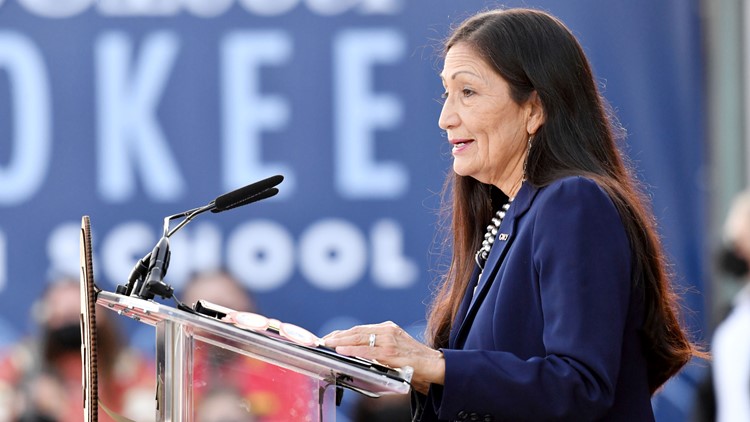 The Interior Department released the most comprehensive investigation into Native residential schools in the United States on Wednesday.

This initial investigation found more than 500 children died at these institutions across the United States, although that number could be in the tens of thousands. The investigation also identified burial sites, both marked and unmarked, at about 53 different residential schools.

“As the investigation continues, the Department expects the number of identified burial sites to increase,” the Interior Department said in a press release accompanying their investigation.

The report also concluded the federal Indian boarding school system operated across 37 states or territories, including 21 schools in Alaska and seven schools in Hawaii, from 1819 to 1969.

This marks the first time in U.S. history the federal government has attempted to research, or acknowledge, the human toll of a brutal system that leveraged children to advance the territorial ambitions and assimilationist policies of the United States.

“Definitely wanting to take the time to take this all in — the magnitude of this. This is the first time we’ve seen something like this in our community,” said Carolina Castoreno, who is the executive director with the American Indian Center of Indiana.

“I think the fact that we have a Native American heading up the department is the reason why we’re even seeing this report happening,” Castoreno said.

While the report is a first, crucial questions around these institutions still linger.

Native American tribes have been urging the federal government to apologize for their role in this brutal system for decades, but the report stops short of issuing one. That lack of official apology, Castoreno said, “absolutely stuck out” to local, Native organizations.

“Even before this report came out, the United States government refuses to use the term genocide when referring to what has been done to Indigenous people in this country. And so, I think that’s part of the problem. I think the federal government is still kind of in that acknowledgment phase. So, how can we have a genuine apology from them if they’re not willing to specifically cite the words for what has been done to our community?” said Castoreno.

Additionally, the federal government’s count of how many children died at those institutions, more than 500, is significantly smaller than Native organizations and individuals who researched the numbers prior to the report reported.

“It is certainly an undercount, but this might be the first time that the government acknowledges the number to be in the thousands or tens of thousands,'” said Preston McBride, who is a Native residential school historian with experience studying student experiences at these institutions. He once estimated the overall number of children who lost their lives there could be as high as 40,000.

Interior Secretary Deb Haaland said in a report: “The consequences of federal Indian boarding school policies—including the intergenerational trauma caused by the family separation and cultural eradication inflicted upon generations of children as young as 4 years old—are heartbreaking and undeniable. We continue to see the evidence of this attempt to forcibly assimilate Indigenous people in the disparities that communities face.”

That included forcibly changing children’s given names to English ones. Their hair was cut, and the use of religious or language practices were discouraged, often through threat of violence.

A 13News investigation released in April found all of those methodologies were employed by religious organizations at two schools in Indiana, and at least 13 children lost their lives at Native residential schools throughout the late 1800s.

For a 14-year span in the late 19th century, the federal government worked in tandem with religious organizations to send hundreds of Native American children to two off-reservation boarding schools in Indiana.

Both institutions are mentioned within the Interior Department’s overall tally of residential schools across the country and were listed in a country-wide map of those institutions.


The Indiana Department of Natural Resources told 13News in April they have launched their own investigation into how many children could be buried at the schools. While there are marked graves of at least eight Native American children at White’s, that may not be indicative of how many children died.

“We decided this was something that we could undertake. Looking for the names of children who went to school there and their tribal affiliation. So we’re going to do some outreach and some communications with various tribal groups. It’s kind of piecing these puzzles together,” Director of Special Initiatives with DNR Jeannie Regan-Dinnius said.

The Indiana DNR is collaborating with teams at White’s Residential and Family Services and researchers with the Jasper County Historical Society to investigate how many children could be buried there. The agency plans to conduct thorough research into both sites with the help of a company that conducts ground penetrating radar research.

“They’ll come up with a potential map. And that’ll give us an idea of the size and shape of the cemetery. It won’t tell me who’s buried in the cemetery, but it’ll tell me whether there’s five graves or 10 graves or 50 graves. Then, that makes a difference of how we move forward,” Regan-Dinnius said.

The DNR hopes to start that research by summer 2022. White’s Residential Family Services said they would cooperate fully with work conducted on-site by the Indiana Department of Natural Resource.

“The primary purposes of the project are to acknowledge the students there, identify the size/shape of the cemetery, restore the stones there, and reach out to the tribes affiliated to conduct outreach. We of course said that we were interested in the project,” White’s Residential & Family Services said in a statement to 13News.

Haaland and Assistant Secretary for Indian Affairs Bryan Newland said the department hopes to release more specific information about the schools in the future.

“So many of us have been affected by the boarding school era — whether it was our parents or grandparents. Then, we have some people who are involved in the community, and sit on the board who they themselves have been through boarding school. This isn’t very far removed from us. And I think that’s important to understand,” said Castoreno.

The Indiana DNR could not be reached for new comments about the Interior Department’s report before deadline.