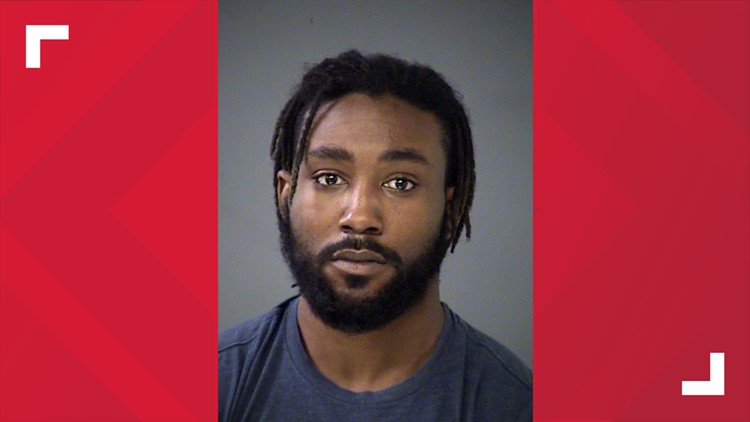 In late summer 2020, Malik Muhammad traveled with his girlfriend from Indianapolis to Portland to participate in the racial justice protests, prosecutors said.

PORTLAND, Ore. — An Indianapolis man who traveled to Portland to join protests in the summer of 2020 was sentenced to 10 years in prison.

Malik Muhammad, 25, pleaded guilty to 14 felony charges after tossing Molotov cocktails at police in Portland and breaking windows during protests. He was initially charged with 26 felonies in Multnomah County, and the U.S. Attorney’s office later added federal charges.

“The risk of a law enforcement officer or community member being seriously hurt or killed by the actions of this individual was very real,” said Portland Police Chief Chuck Lovell in a statement. “I’m gratified to know that he is being held accountable for the danger his criminal actions caused.”

During a sentencing hearing Tuesday, Muhammad expressed remorse and explained he wasn’t on his medication for bipolar disorder and post-traumatic stress, according to The Oregonian/OregonLive.

Months before the Portland protests, Muhammad met with Indiana Gov. Eric Holcomb to discuss police reform after a June 1, 2020 protest march to the governor’s residence on North Meridian Street. At the protest, Muhammad made headlines when he hugged a police officer while working to defuse a tense situation.

Months later, Muhammad traveled with his girlfriend from Indianapolis to Portland to participate in the racial justice protests, explained prosecutors.

On Sept. 5, Muhammad provided baseball bats to rioters at a demonstration where people threw Molotov cocktails and other dangerous objects at police, according to court documents. After the demonstration, police found a discarded bat with a Goodwill price tag. Police later recovered surveillance video from Goodwill showing Muhammad and his girlfriend purchasing the bats and several growler bottles.

During another demonstration on Sept. 21, 2020, law enforcement saw someone light an object on fire and throw it toward a Multnomah County Sheriff’s Office building, the U.S. Attorney’s Office said. The makeshift Molotov cocktail, which did not explode, was made with one of the growlers Muhammad had purchased at Goodwill. Police also linked the bottle to Muhammad by DNA.

Two days later at another demonstration, Muhammad was seen on video throwing another Molotov cocktail in a large growler toward law enforcement. The device exploded and an officer’s pant leg caught on fire, prosecutors said.

On Oct. 11, 2020, a group of rioters began vandalizing businesses and parks in downtown Portland, including the Oregon Historical Society. Police said Muhammad smashed the windows of multiple buildings and officers arrested him after a short chase. Muhammad was carrying a loaded handgun magazine that matched a loaded handgun found discarded near the location of his arrest.

After Muhammad’s October 2020 arrest, law enforcement found messages on his cell phone bragging about providing the baseball bats, as well as a shopping list of supplies commonly used to make Molotov cocktails.

As part of his sentencing, Muhammad forfeited several guns and weapons. His federal sentence will run concurrently with a 10-year sentence recently imposed in Multnomah County Circuit Court. Muhammad will serve his 10-year sentence in Oregon state prison.

Muhammed helped organize various rallies in Indianapolis in the summer of 2020 against racial injustice and police use of force, according to press reports.

Muhammad made headlines after helping to defuse a tense standoff between police and demonstrators in Indianapolis by hugging a police lieutenant on June 1.

RELATED: Officers march peacefully with protesters outside the governor’s residence

Days after the exchange, Muhammad had a private meeting with Indiana governor Eric Holcomb to discuss police reform.

Public records indicate Muhammad is an Army veteran and had no criminal history prior to the violent Portland protests.