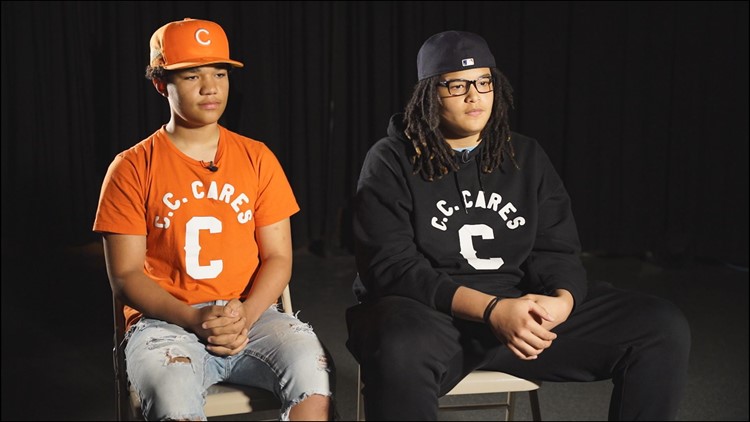 “Being yourself is not lame,” one teenager said. “Not wanting to die young is not lame.”

INDIANAPOLIS — Every Tuesday at a far east side karate class, some of the city’s youth are given the choice to improve themselves — not just in the sport, but in life.

It’s a philosophy Kareem Hines teaches in his weekly karate class. He founded “New B.O.Y.” (New Breed of Youth) mentoring and youth development after moving to Indianapolis. The program works with at-risk youth and gets them involved in sports, community service and life skills classes.

“We get our boys together four or five days a week, and it’s a community-based program,” Hines said. “We’re trying to get them to understand that you are not only affecting yourself when this happens, whether you are the perpetrator or the victim, it’s a whole family.”

Sadly, Hines said not everyone who is involved stays on the right track. It’s something 14-year-old Cam Washington and 16-year-old Patrick Collier know all too well.

“I have people that made those decisions and they’re not here no more. I know people who are never going to see their mom again,” Washington said.

“A lot of people my age are going down the wrong path. I personally watched my brother go down a path with drugs and being involved with the wrong people,” Collier said.

The two teens met each other through New B.O.Y. last year. They both grew up in Indianapolis, but in different neighborhoods.

“I never really stayed in one place for too long. My mom and my siblings always moved around. We never had a place to call home for more than, I would say, two months,” Collier said, who currently lives on the far east side. “What came with that was sleeping in shelters a lot and sleeping in a lot of cars at gas stations.”

“I was in this place on Arlington and down the street, there was a crack house raided every weekend. Coming back from the store, I would see SWAT cars and everything,” he said.

During those times, both teens were faced with challenges and difficult choices. Sometimes that included making the wrong decision.

“I was a perpetrator, and I have also been a victim of gun violence. My first charge was for a gun and then I was in (jail) for probably about a month and the judge thought I was on good behavior, so they let me go,” said Washington, who was 13 at the time.

A few days later, he found another gun.

“I was just playing with it and then I tried to empty it, and I shot myself on accident,” he said.

At the moment, he said he didn’t realize he shot himself. He then threw the gun and hid the shell casings. As soon as he walked into the house, he said he hit the floor and passed out. His older sister found him and called police.

Shortly after returning from the hospital, he went back to jail, but that night was the last time he ever picked up a gun.

It’s why now, when he sees another teen shot or arrested, it’s frustrating because he knows it’s not worth it.

“When I see somebody lose their life over something they don’t really need to be doing, it really hurts because why, why are we doing this? Why does this cycle keep spinning?” he asked.

“You are not alone. You got people that want to help,” Washington said.

Last December, the two teens started a small business to give back to the community. Most recently, they handed out gift cards downtown and plan to do a backpack drive soon. They called it “C.C. Cares.” They want to inspire other teens to become the best version of themselves.

On Wednesdays, they also take part in a community forum hosted by “New B.O.Y.” that serves as a space for families and young people to discuss the violence happening in the city. Everyone is invited to participate.