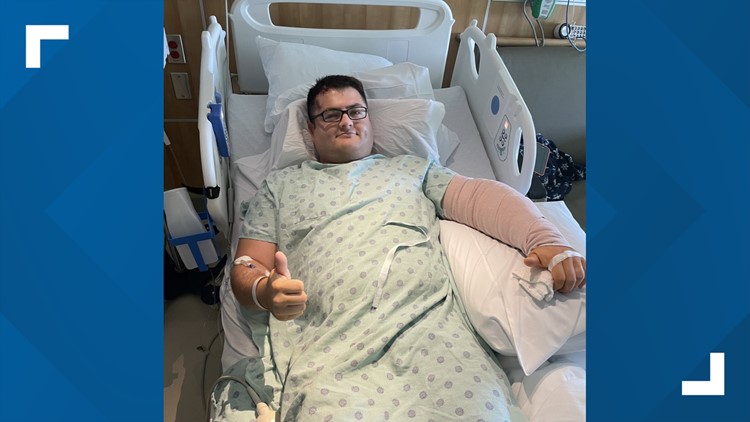 It’s the second time in three months Trooper Keith Martin has been hit by a drunk driver while on the job.

INDIANAPOLIS — An Indiana State Police trooper is on the mend after getting hit by a suspected drunk driver early Monday morning. He is expected to make a full recovery, ISP Sgt. John Perrine said Tuesday.

Trooper Keith Martin was outside his car, assisting Speedway Police and IMPD in the 2700 block of High School Road where a semi-trailer was on fire shortly before 3:30 a.m. Monday.

That’s when 35-year-old Mayte Alaverez Rebollar, who was driving a silver Toyota Corolla, allegedly hit Martin and an IMPD officer.

(NOTE: The video above is a previous report about Rebollar’s arrest.)

Police said Rebollar drove away from the scene after hitting the officers. Shortly after, Speedway Police stopped the Toyota near 7500 Crawfordsville Road in Brownsburg. Officers noted damage to the vehicle consistent with the collision on High School Road, and they found open alcohol containers inside.

Officers arrested her on the probable cause of operating a motor vehicle while intoxicated causing serious bodily injury and leaving the scene of a crash causing injury.

In an update posted to Twitter Tuesday, Perrine said Martin suffered serious injuries but is expected to fully recover. He also said it’s the second time Martin has been hit by a drunk driver in the last three months.

The first time, Martin was inside his car, which was totaled in the crash.

Yesterday he was struck by a drunk driver while outside his car. He sustained serious injuries but is expected to fully recover

The 2nd time in 3 months he has been hit by a drunk driver, last time he was inside his car and his car was totaled

The IMPD officer suffered minor injuries in the crash and was treated at the scene.

As of Tuesday afternoon, the Marion County Prosecutor’s Office had not filed official charges against Rebollar.