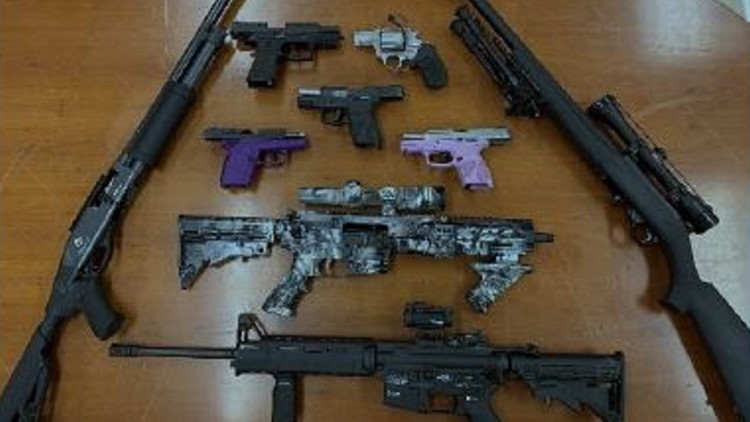 IMPD said it arrested eight people in three investigations over the weekend.

INDIANAPOLIS — Recent IMPD investigations resulted in seizures of multiple handguns and the arrest of juveniles and a wanted man.

On June 11, IMPD said officers were monitoring cameras in the downtown and canal areas after a disturbance with juveniles. Those officers were able to use the cameras to direct responding officers to the juveniles.

Officers located the group of teens and one of the officers noticed a bulge in the left pant leg of one of the teens.

A rifle was found in the pants of a 16-year-old and a 15-year-old was also arrested for possession of a firearm.

Both were taken to the Marion County Juvenile Detention Center.

Also on June 11, officers in the 5700 block of Wilkins Street spotted a wanted man getting into a car. Officers stopped the car and arrested 20-year-old Sao Sorsor Junior. He was wanted for felony burglary and unlawful possession of a firearm by a serious violent felon. Officers also arrested 18-year-old Lemuel Gathing for carrying a handgun without a license, possession of cocaine, and possession of marijuana.

Officers then served a search warrant at a home in the 2300 block of Hoyt Avenue and found five loaded handguns and three loaded rifles.

On June 12, officers were involved in a chase with a driver on South State Street. The driver crashed in the 900 block of East Maryland Street. The 15-year-old driver ran, but was later caught and arrested for resisting law enforcement and dangerous possession of a firearm. A 16-year-old passenger inside the vehicle was also arrested for dangerous possession of a firearm.