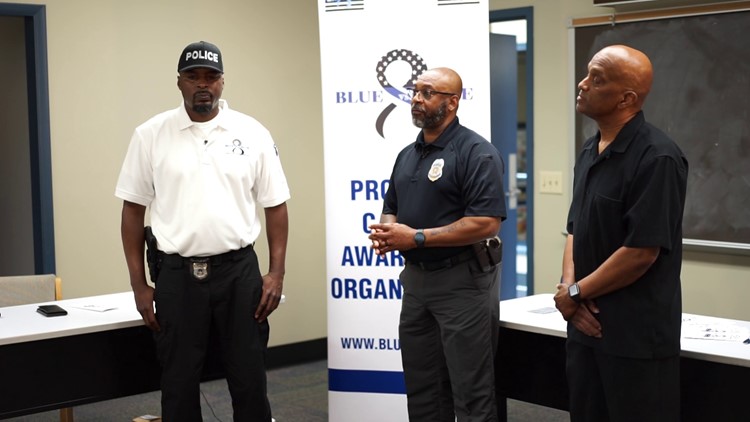 The American Cancer Society estimates more than 5,000 men will be diagnosed with prostate cancer this year in Indiana,hea and 770 will die.

INDIANAPOLIS — More than 200,000 men are diagnosed with prostate cancer each year, and now three IMPD officers who are prostate cancer survivors are sharing their stories in hopes of bringing awareness to the disease.

Serving and protecting the community is no easy task for a police officer, especially when they’re dealing with their own battles.

Officers Dean Harris and Wyonne Hale, and retired IMPD officer Edward Gurnell recently met one another and learned they were all prostate cancer survivors.

“I was by myself. I had no one to talk to about it,” Harris said. “I was going through a lot of emotions, depressions. I didn’t know what to do.”

Harris is a seven-year survivor and said he hadn’t talked to anyone since his surgery in 2014, until he met Hale and Gurnell. Hale is just shy of one year of having his prostate removed.

“It was a shock. It was a slap to the face. Here I am with a year left, and I felt that I was going to die,” Hale said.

Gurnell, the oldest of the group, had his prostate removed 10 years ago.

The cancer not only impacts them mentally, but physically as well on the job.

“Your eating habits, drinking habits because you have to actually use the bathroom more when they take your prostate,” Hale said.

Harris created the organization Blue vs. Blue several months ago, spreading awareness to law enforcement agencies across Indy and the country, as a support group for those with prostate cancer.

“When we had our meeting, I know I shed a few tears,” Harris said. “Because that was the first time since my surgery, since 2014 … the first time I was able to discuss what I was dealing with.”

The American Cancer Society estimates more than 5,000 men will be diagnosed with prostate cancer this year in Indiana, and 770 will die.

“Detect it early. That’s the key right there, so we need to get out and talk to younger officers,” Gurnell said.

“Get your physical, get your checkup and you’ll be able to catch something like this. Had I not gotten my physical, I probably wouldn’t have caught it,” Hale added.

The American Cancer Society recommends early detection screening for men at age 50 who are at average risk. African Americans and men who have a first degree relative diagnosed at an early age should get screened around 45 and men at age 40 with higher risk.

However, the group believes the age needs to be lowered to as young as 30 to catch the cancer even earlier. They’re pushing to help change guidelines on the age for early detection.