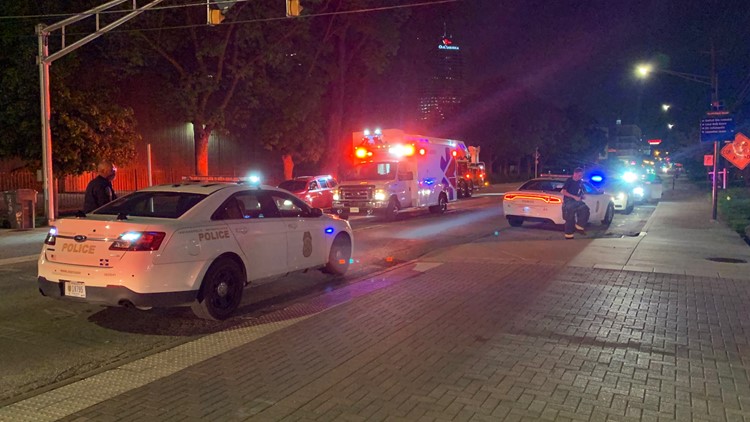 Police said four women, all between ages 17 and 24, were listed in good condition Wednesday morning.

INDIANAPOLIS — (NOTE: This story was updated to reflect that a total of four people were shot in this incident. Information previously shared with 13News by IMPD indicated that there were five victims. Police said Wednesday morning that a fifth person was shot in a separate incident.)

Shortly before 12:30 a.m., two IMPD bicycle officers were patrolling along the Indianapolis Canal Walk when they heard shots fired in the area of West Walnut Street. Officers located four people who had been shot along the canal, near West St. Clair Street.

IMPD said all four victims were in stable condition, some with injuries considered minor. At 8 a.m. Wednesday, police said all four women – ages 17, 18, 23 and 24 – were listed in good condition.

Police said they believe a disagreement between two groups led up to shots being fired at each other from both sides of the canal. Two children were at the scene at the time but were not injured.

Residents in the area witnessed the shooting and reported it to police.

“It’s obvious people cannot control themselves on a warm night in Indianapolis,” said IMPD Maj. Kerry Buckner. “The canal used to be a real nice place to come down, bring your family, walk at night. But not anymore. I don’t know what there is to do on the canal that draws them down here at midnight.”

As of early Wednesday morning, police said they did not have any suspects in custody. IMPD said some people were being questioned in the case.

Police said they believe the shooting was a targeted incident and there is no ongoing risk to the public.

Anyone with information on the incident is asked to call Crime Stoppers of Central Indiana at 317-262-8477.