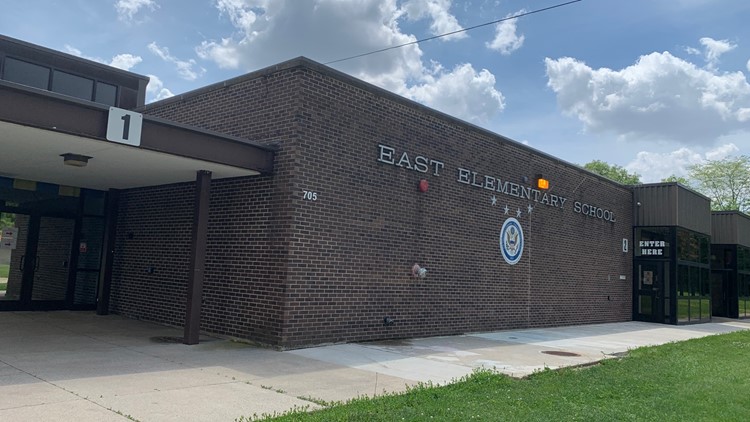 They Jay School Corporation has a three-pronged approach to maximizing safety in schools: prevention, hardening and arming.

JAY COUNTY, Ind — Four years ago, after the deadly school shooting in Parkland, Florida and the near-tragedy at Noblesville West Middle School, 13 Investigates shared how an Indiana school district was making major changes to security: reconfiguring buildings, even allowing teachers to access guns in school buildings.

So how has it all worked? Are students safer? What lessons have they learned?

There were changes just upon entering a school in Jay County. A single-point of entry for visitors has a locked vestibule, before anyone ever gets near an office, a classroom or children.

“We want to see you and hear you before you even get in,” explained Jay County Superintendent Jeremy Gulley.

The dramatic differences in four years range from background checks for visitors to bolted doors on classrooms to ballistic windows.

“You’re not going to shoot through that glass,” Gulley explained. “You’ll notice, we’re also offset vision windows. From Parkland, he shot through the vision window. Just the design of the doors can help.”

Gulley, in addition to leading Jay County Schools, is also a parent and a retired Indiana National Guardsman. He said that experience has guided his work securing schools. He’s made it his mission to defend against danger in his district.

“We’ve moved the needle. Prevention, hardening and arming, everything we’ve talked about we’ve moved it,” Gulley said. “And we’re not done. This is a continuous effort for us. We’ve said this from the beginning: We want this to look and feel like a school, so I think the approach we’re taking is sensible. We’re just constantly having to learn new lessons that we are sad to have to re-learn.”

Out of the three-pronged approach of prevention, hardening and arming, it was that last part that grabbed attention when 13News first visited in 2018.

In a rural community, response time can be a second enemy in a school shooting, so Jay County backed a bold step — a first for Indiana. Somewhere in each school building, there’s a hidden handgun.

It’s locked in a biometric safe, protected by alarms and cameras, a weapon at the ready for access with a fingerprint for a secret team of teachers and staff.
They’re trained to pull the trigger as a last line of defense.

“If all these layers fail, we believe that someone in that school has to confront the shooter with armed force,” Gulley said.

Training for teachers and staff who volunteered to be able to use the weapons happens every quarter, not just on the range, but in school-based complex scenarios.

Gulley said no one has accessed the safes in the last three and a half years due to an active shooter, but there are other situations.

“As far as accessing the firearm for concealed carry when a school is under a threatening condition, like we’ve experienced when schools get threats? We will authorize individuals who are non-teachers to put themselves in a conceal-carry posture so that weapon is on the hip and ready to use.”

Arming school employees isn’t the only change. The high school now has random metal detectors. The district also hired a school resource officer in 2019 and more recently a furry “metal detector,” in the form of a 1-year-old black lab named Jack.

In classrooms, students now know one specific area is protected in an emergency and they practice it regularly.

“That’s a hidden corner in every classroom in an active shooter drill. That’s where kids are going,” Gulley said.

The point of the design is if a gunman does get in, they can’t see the kids. Their line of vision is literally cut off and the students stay safe.

The district doubled the number of surveillance cameras and reconfigured room signs so that they stick out and are visible, instead of being flush against the wall.

They also have color-coded panels hanging in hallways — all of it to better direct police responding to a threat. For example, they can be directed to “blue” hallway and “Mrs. Smith’s” class. The signs are clear.

“So not only can first responders see those panels, but our cameras are tied in now to our 911 dispatch center,” Gulley said. “These are low-tech cues to help keep things safe.

But the most effective part of their safety plan adopted over the past four years, Gulley said , has been the Sandy Hook Promise app, to report threats anonymously. It’s free for the district.

“I’ve stopped altercations that way. I’ve found drugs that way, I found vape pens and school threats,” Jessee said. “I’ve been able to track down who threatened the school and we’re able to kind of get them out of the school system at that time. Information’s half the battle. If you have the information, you’ve solved the problem.”

“It’s been the biggest surprise because it’s worked every time. People are talking to us now,” Gulley added.

Over the last four years, Gulley’s been talking with other superintendents about what works, what doesn’t, and what to try when it comes to school security. He’s also connected with parents who’ve lost children in school shootings, including Max Schachter, whose son Alex was one of 17 killed in Parkland, Florida, at Marjory Stoneman Douglas High School.

“We miss Alex, and after this happened, I made it my mission to do everything I could to prevent this from ever happening again,” Schachter said. “Jeremy gets it. This is all he thinks about 24/7, and that’s what you want! Every superintendent and every principal has to prioritize this issue. You’ve got to be on your toes constantly and have a security mindset. In Parkland, we had that mindset that it’s not gonna happen here.”

Much of what is seen in Jay County now, came after studying what failed in Parkland. The district’s security team is meeting again, after the tragedy in Uvalde, to study failures there and adapt again. Learning lessons and evolving strategies is key to safety, Gulley said.

It’s why he wanted the district’s latest purchase, just approved by the school board. It’s a $150,000 alert system from Centegix. Every teacher will get a badge with a button that hangs around their neck and can signal an emergency in seconds.

Gulley said it’s better than phone-based systems they’ve tried before because there’s no scrambling to find a phone or struggle to connect with Wi-Fi if presented with a threat.

“You see something that doesn’t look right, feel right? Just press the card so the rest of the building can initiate the lockdown,” Gulley said.

Gulley believes layered security, from weapons to warnings, is reducing risk in his district and keeping kids safe.