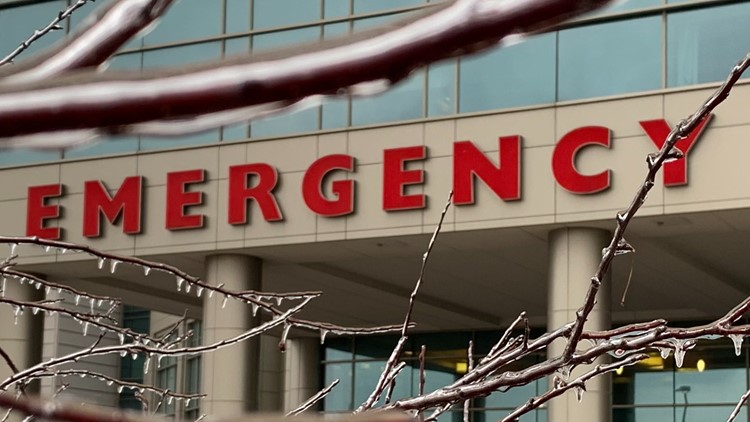 The Indiana Hospital Association says the web portal was intended to be used only by hospitals and EMS crews – not by patients.

INDIANAPOLIS — Late Tuesday afternoon, the Indiana Hospital Association blocked online access to important information about Indiana emergency rooms and intensive care units. Unknown to most Hoosiers, the hospital diversion data had been publicly available online for months, but was restricted within hours of 13 Investigates asking about the data.

13News learned of the IHA website that showed which Indiana ERs and ICUs have been on diversion status. The website, which includes hospital diversion information collected by the IHA was publicly accessible without a username and password.

This winter, many Indiana emergency rooms were “overwhelmed” and in a “state of crisis,” according to a January press release from the Indiana Hospital Association.

Patients had to wait hours – sometimes days – just to get a hospital bed. Fueled by COVID-19, an overwhelming number of patients combined with a shortage of healthcare workers forced many Indiana hospitals to declare diversion, a non-binding request to ambulance crews to transport patients to a different facility.

The health department took months to provide the first records. They showed Indiana hospitals were in diversion status for nearly 19,000 hours in September alone, and some hospitals remained on 24-hour diversion for weeks on end. By December, as diversions across the state began to peak, IDOH stopped releasing daily diversion data altogether.

“We actually don’t want people picking and choosing which hospitals they go to based on diversion data,” state health commissioner Dr. Kristina Box said last fall, when asked why the state was not more transparent with its hospital diversion data. She said the data is intended only for ambulance crews and changes very rapidly, rendering it unhelpful for the public.

But a 13News investigation showed some other states post their hospital data online and update it around the clock. Georgia, for example, has an online portal displaying which emergency rooms and intensive care units are normal and which are considered busy, overcrowded or in severe diversion status.

But that level of transparency has not been available in Indiana, where state health officials and hospitals have tried to keep diversion data hidden from public.

This week, 13News obtained an anonymous tip, directing 13 Investigates to the online hospital diversion dashboard maintained by the Indiana Hospital Association. The link provided to 13News directed users to an unprotected website available to anyone, and it showed a snapshot of each hospital’s ER and ICU status. While the website did not show diversion information in real-time, the portal said data was updated once daily at 2:30 p.m., and it also showed the number of hours (if any) that each ER and ICU was in diversion status the prior day.

A total of six Indiana hospitals were on diversion at some point Sunday or Monday, including the emergency room and ICU at the St. Vincent Heart Center, and the ERs at Indiana University Health Saxony and West.

During a COVID-19 spike in mid-December, for example, at least 25% of all ERs and ICUs in Indiana were forced to divert patients. By comparison, roughly 1% of Indiana’s ERs and ICUs are in that situation right now.

The Indiana Hospital Association says the web portal was intended to be used only by hospitals and EMS crews – not by patients.

“We do have concerns about how this will be consumed by the public,” Brian Tabor, president of the Indiana Hospital Association, told 13News Tuesday afternoon. “It is a real concern that someone might use a dashboard … and see a red light, see a stop sign, and think that means he or she should not seek care at the closest hospital.”

In other states, where diversion information has been posted online, health officials say they have not seen that concern become a reality.

“I’m not aware of that ever occurring,” said Dr. Ted Delbridge, who runs Maryland’s hospital status portal for the Maryland Institute for Emergency Medical Services Systems. “If the information is presented in a way that explains to them what they’re looking at, (they) can make a reasonable judgment for themselves. More information is better.”

And some emergency room doctors in Indiana say making hospital diversion information available to the public serves another important purpose.

“I think it’s good to be open-handed with that data even if it’s not in real-time but very close to it so people can have an understanding of what’s going on in their city, what hospitals are full, what hospitals have capacity,” said Dr. Graham Carlos, executive medical director and an ER physician at Eskenazi Hospital.

Late Tuesday afternoon, minutes prior to the 13News report airing, Tabor contacted 13 Investigates to say that leaving IHA’s diversion portal publicly accessible is considered a violation of their user agreements with hospitals and left the organization vulnerable to possible cyberattacks. He did not realize that the site had not previously been password protected. As such, IHA took immediate steps to add additional security, which prevents the public from accessing the dashboard.

“At this point, we have no plans to make that information public,” Tabor said.

It’s important to point out, even if a hospital is on diversion status, its emergency room is still open and will not turn you away. If you are having a medical emergency, call 9-1-1 and get to the closest emergency room as soon as possible.