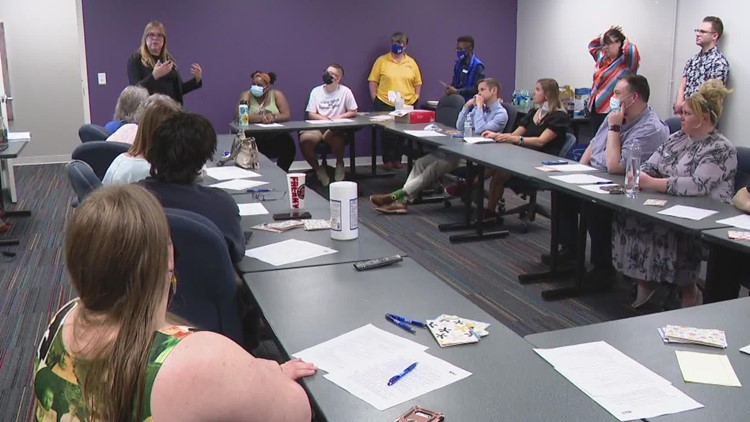 INDIANAPOLIS — A bill that would ban transgender girls from playing on high school athletic teams could still become law, even after Governor Eric Holcomb’s veto of it.

Holcomb vetoed House Bill 1041, saying it fell short, left too many unanswered questions and put schools at risk for being sued.

House Speaker Todd Huston has said Republican lawmakers will override the veto later this month. If that happens, the ACLU of Indiana says it will file a lawsuit the same day.

The ACLU, along with Indiana Youth Group, GenderNexus and Indy Pride, held a letter-writing party Tuesday, messaging state lawmakers and spelling out what they want to see happen next with the bill.

“Vote no on the override,” said the ACLU’s Kit Malone.

If the override happens, students who were born as a male but identify as female would be banned from participating in a sport or athletic team designated for women and girls.

“Little girls should be allowed to play with little girls, even if they are gender-diverse,” said Julie Stanley.

Stanley drove from Greenwood with her 18-year-old son, Jason Taylor, to help write the letters, asking lawmakers to not support the bill or overturn the governor’s veto of it.

“These are regular kids. They don’t have ulterior motives, no malicious intent. They just want to go out and have fun with their friends and better themselves through sport,” said Jason.

Stanley is board president of GenderNexus, an organization that supports transgender and gender-diverse people living in Indiana.

“I feel like putting my support behind these little girls is the right thing to do,” Stanley said.

Lawmakers who support HB 1041 say it’s about protecting the integrity and competition in female sports. At least 10 other Republican-led states have similar bans.

The Indiana High School Athletic Association has a policy that addresses transgender athletes, calling for them to go through an application process that includes disclosing medical treatment related to their transition.

According to the IHSAA, no transgender girls have finalized a request to play on a girls’ team.

“We talk about trying to solve a problem that doesn’t exist, and that seems like what this is,” said Stanley. I just feel like it’s an obligation and a duty to stand up for these kids.”