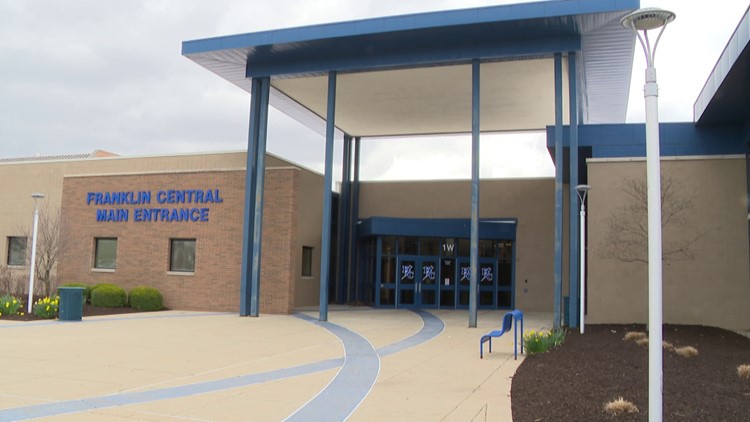 The vast majority of the $98 million referendum requested by FTCSC would pay for renovations at the high school.

MARION COUNTY, INDIANA, Ind. — To understand why Franklin Township is asking taxpayers to approve new spending for the school district, school officials say you just need to take a look at the hallway at Franklin Central High School — or at the building boom that’s taking place across the township.

“We’ve seen tremendous growth,” explained Fred McWhorter, Franklin Township Community School Corporation chief operating officer. “We’ve increased 1,800 students over the past five years. We have a demographic study that shows we’re going to grow another 2,000 students over the next 10 years, and so we have to have a place to put them.”

Franklin Central English teacher Lisa Laker says with so much growth, many classrooms at the high school are just too small for the type of teaching students need.

“It does not allow a teacher to have collaborative learning, breakout groups. Even circulating around the room, there is not enough space,” said Laker, who has lived and taught in the school district for 26 years.

The vast majority of the $98 million referendum requested by FTCSC would pay for renovations at the high school.

To most visitors who come to Franklin Central High School for athletic events or school performances, the facility appears to be in great shape, thanks to a renovation that took place in those parts of the building about 20 years ago. But school officials say the core classroom portion of the high school was built in the mid-1970s and is now approaching 50 years old.

What students and parents cannot see — the infrastructure — is now in desperate need of replacement, according to Rick Hunter, the school district’s facilities director.

“The duct work, behind the ceilings, the HVAC units, they wouldn’t see that,” Hunter told 13News, holding a piece of rusted pipe that corroded and sprung a leak. “We’ve got a lot of 50-year-old piping behind the insulation. It needs attention.”

Some classrooms at the high school, including science labs, are still using computers and equipment that are decades old, school officials say. A major renovation plan funded by the referendum would change that, including millions of dollars to update and expand classrooms and funding to upgrade electrical, plumbing and HVAC units inside the school.

“It takes time to plan out the project and have the project come to fruition, and so that’s why now is an important time for us to go ask the community for this referendum,” said Chase Huotari, FTCSC’s chief academic officer for secondary schools. “We want to offer the best education possible to our students, and part of that is facilities.”

The referendum would also provide more than $5 million for improvements to Franklin Township’s six elementary schools. Those improvements include new flooring, playground equipment, fencing and paint, as well as other repairs and upgrades to the elementary facilities.

School administrators say they understand that is significant cost for taxpayers, but they believe not approving the referendum could end up being even more costly.

“I can promise if the referendum fails, it’s just going to cost us more later in order to fix the problems we have,” McWhorter said. “Doing nothing isn’t an option. We have to do something.”

Franklin Township Community Schools has posted more detailed information about the referendum, including expansion and spending plans, renderings, growth projections and financial impact. It also includes a tax calculator for Franklin Township residents to better estimate the cost of the proposed referendum on their 2023 property taxes.

Franklin Township residents can vote on the school referendum on May 3. Early voting is Marion County is open now.