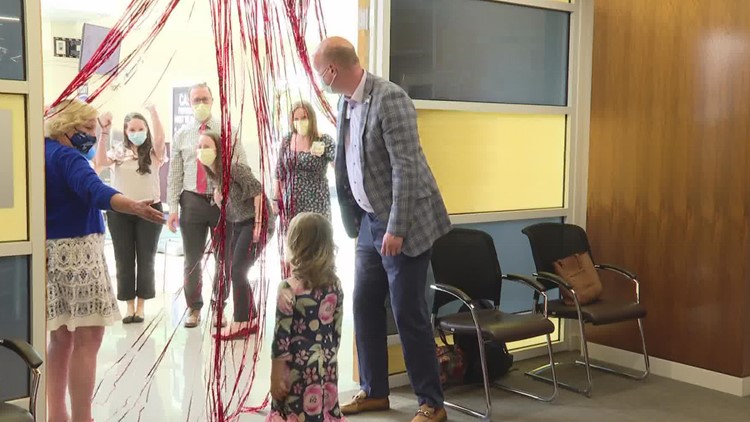 Roslyn Walsh wanted to bake two cakes: One for her family, and one for the medical professionals at Riley.

INDIANAPOLIS — A lot of kids who go through the Make-A-Wish program ask for things like trips to Disney World or a chance to meet their favorite celebrity. But one little girl from Indiana decided to use her wish to thank the doctors and nurses who helped her beat cancer.

At The Cake Bake Shop in Broad Ripple, owner Gwendolyn Rogers has some extra help with the baking, as 6-year-old Roslyn Walsh works to whip up something sweet.

“After, will we put on the icing?” asked Roslyn.

“Yeah, we’re going to do that next,” Rogers said, helping her put ganache on the cake.

Roslyn is here for a special reason.

“It was because I don’t get to really bake cakes a lot, so I wanted to get to bake a cake,” Roslyn said.

She’s making one cake for her family and another for the doctors and nurses at Riley Hospital for Children. They took care of her when Roslyn was battling cancer.

“To say thank you for what happened, for getting me done with cancer,” Roslyn said.

Diagnosed with an aggressive form of cancer in her kidneys just before turning four years old, parents Tai and Eric Walsh said this was a scary experience to go through.

“It’s definitely scary at first, the unknown, but the care at Riley we received, it was comforting,” said Tai, Roslyn’s mother.

That care received at Riley for Roslyn helped to save her life.

“She’s really been amazing every step of the way, even from her diagnosis, her surgeries, she’d bounce right back within a day. She was smiling and happy, really a trooper,” said Eric, Roslyn’s father.  “It’s a blessing every day. And she still gets scans, actually just this week on Tuesday she had her three-month scans and they were all clear, and it’s always a sigh of relief.”

With a little help from Make-A-Wish, Roslyn was able to surprise those who cared for her at Riley, bringing them a big thank you and a big cake.

“We can’t really repay them the way we would like to. I mean, they helped to save her life,” Tai said.

The doctors and nurses were thrilled, excited to see this young girl back on her feet again. Now, with her scans all clear and new cookbook in hand, Roslyn is ready to jump into that next sweet chapter in life.

“So now I can make all the cakes I wanna,” she said.

Roslyn’s was the 19,000th wish granted through the Make-A-Wish Ohio, Indiana and Kentucky chapter.