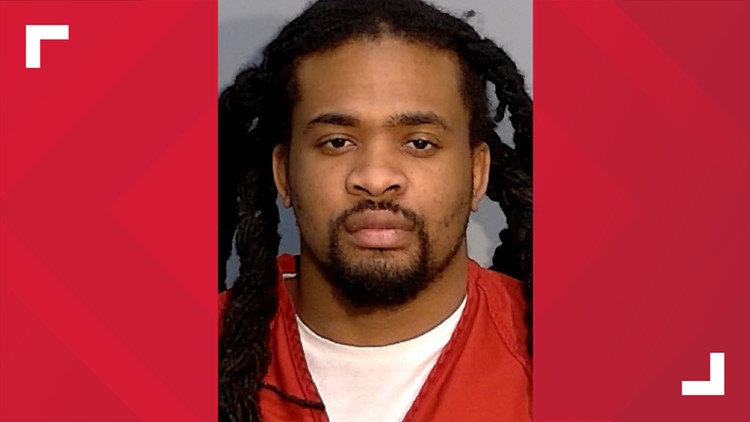 When Mylik Hill violated his parole, his wife bailed him out at 1:32 a.m., before prosecutors saw his case. About a month later, Hill allegedly shot an IMPD officer.

INDIANAPOLIS — Indianapolis Metropolitan Police Officer Thomas Mangan faces a long recovery after being shot in the throat while responding to a call Feb. 27. The man accused of shooting Officer Mangan, 31-year-old Mylik Hill, now faces a long list of felony charges, including three counts of attempted murder, six counts of resisting law enforcement, and unlawful possession of a firearm by a serious violent felon.

There are serious concerns about why Hill was out of jail at the time of the shooting in Fountain Square. Tuesday’s news conference announcing the charges against Hill ended in an outburst from the Indianapolis police union president against Marion County Prosecutor Ryan Mears amid an ongoing fight over bail-bond reform.

“How are there gaps in the system?” Snyder shouted toward the cameras. “How is there a warrant for parole and nobody caught it and the suspect was released? These are all fair questions that every resident in Indianapolis deserves an answer to – let alone the 1,700 police officers that are risking their lives.”

Hill was released from the Putnamville Correctional Facility about a year ago on parole. He was marked delinquent with his parole officer as of Jan. 19.

Then on January 31, he was arrested with another man for allegedly shoplifting two televisions and clothing from the Walmart near 71st Street and Keystone Avenue and fleeing from police in a car. The two men were caught near the Butler University campus.

“By the time we filed the case, that particular individual was released and the only thing that we can do at that particular point in time is request a warrant,” said Mears. “There was a parole warrant active at the time that this incident occurred.”

Hill remained free on bond for almost a month before police say he shot Officer Mangan Feb. 27 just after 10 p.m. in Fountain Square. 13News is trying to contact the judge who granted the bond to learn what information he had to make the decision.

The Marion Superior Court issued this statement late Tuesday in response to our request for information on the bond decision:

“Individuals arrested for a Class A Misdemeanor or Level 6 Felony in Marion County undergo an Indiana Risk Assessment (IRAS). Criminal history data is also compiled from the Indiana Prosecutor’s Portal. Additionally, when an officer makes an arrest, it is noted whether it is an outright arrest or an arrest for outstanding warrants. All outstanding warrant information, if available, is entered into the Offender Management System (OMS) by the Marion County Sheriff. The Court compiles information from OMS, Indiana Prosecutor’s Portal and the IRAS for bond determination.

“In the case of Mylik Hill … there was no indication of any outstanding warrant(s) for parole supervision at the date of his arrest on January 31, 2022.  The bond was set based upon the outright arrest for the highest charge of a Level 6 Felony, which was a $500 cash bond.  The bond was posted prior to charges being filed on February 1, 2022. A Motion to Revoke bond was filed on March 8, 2022, under this cause.

This matter is currently pending before the Marion Superior Court and the court is unable to offer additional comments due to the Indiana Code of Judicial Conduct.”

“We don’t set bonds,” said Mears, “and we’re not a part of that process in terms of what does that initial bond determination look like.”

“This officer is fighting for his recovery,” said Snyder, “and there’s questions of whether or not this could have been prevented. All we want is answers.”

Hill was delinquent on his parole. He then allegedly committed another crime, a parole violation. But he got out on bail and remained free for nearly a month before the Fountain Square shooting.

Who’s responsible for the gap in the system? It’s a question for which 13News will keep trying to get an answer.