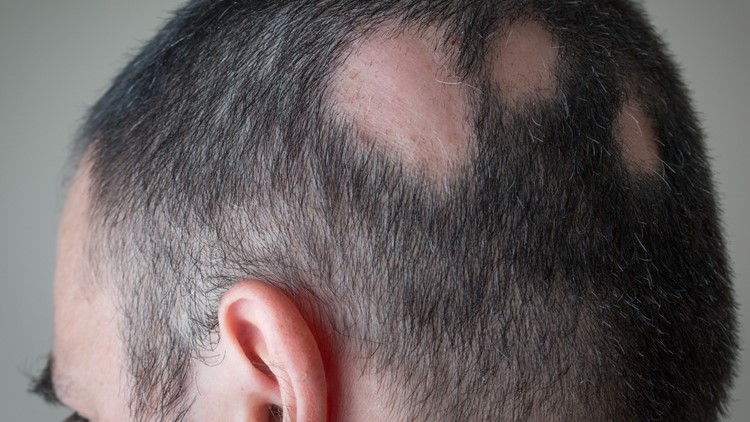 In a set of “milestone” trials, patients with severe hair loss from the disorder saw significant results.

WASHINGTON — Some patients with severe hair loss from alopecia will have a new option for treatment, the Food and Drug Administration said Tuesday.

This marks the FDA’s first approval of a systemic treatment — something that treats the entire body — for alopecia. It helps meet “a significant unmet need,” FDA division director Kendall Marcus said in a release.

It was tested in a set of randomized, double-blind, placebo-controlled trials, involving 1,200 patients with at least 50% scalp hair loss from alopecia. They received either a placebo, 2 milligrams, or 4 milligrams of the drug every day.

The trials measured how many patients reached at least 80% scalp hair coverage at week 36. In the first trial, 22% of patients receiving 2 milligrams and 35% of those receiving 4 milligrams reached the goal. In the second trial, 17% and 32% were successful.

That’s compared to the patients who took a placebo in the two trials: 5% and 3% reached the goal.

Alopecia can make patches of hair fall from the scalp and also affect other parts of the body, like eyebrows. The disorder is fairly common, affecting about 2% of the population. The FDA said more than 300,000 in the U.S. have severe cases.

Yale University professor Dr. Brett King served as lead investigator for the trials. He told the Associated Press in March that hair loss from alopecia can be quick, unpredictable and hard to deal with mentally.

“Imagine if you woke up today missing half of an eyebrow,” King said. “That unpredictability is one of the things that’s so mentally treacherous and awful because you have no control of it … it’s a disease that strips people of their identity.”

The trials, sponsored by Lilly, were published in the New England Journal of Medicine last month.

In an accompanying editorial, Dr. Andrew Messenger of the University of Sheffield and Matthew Harries of the University of Manchester wrote that the results mark “an important milestone” and “represent the first published phase 3 trials of any treatment for this condition.”