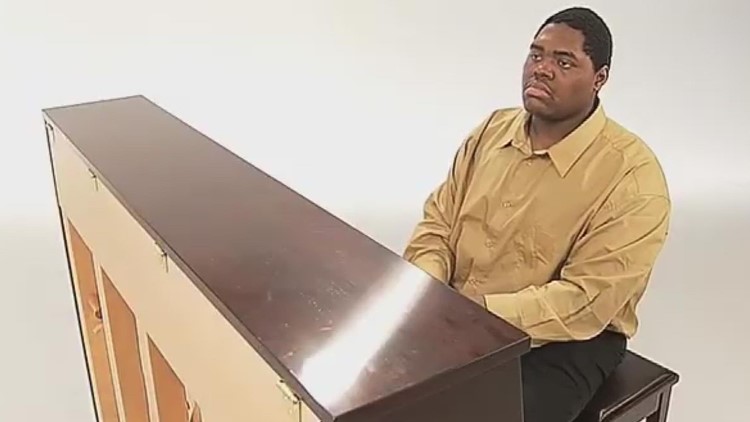 The lawsuit claims the officers ignored Herman Whitfield III’s cries of “I can’t breathe” and left him in the prone position.

INDIANAPOLIS — The family of Herman Whitfield III filed a federal wrongful death lawsuit against the city of Indianapolis and six IMPD officers.

The lawsuit also claims the officers ignored Whifield’s cries of “I can’t breathe.”

The family said the claims in the lawsuit are supported by police officers’ bodycam videos. The family was allowed to view the videos, but said IMPD is refusing to release them publicly.

The lawsuit asserts there was no reason for officers to have used a stun gun on Whitfield and that officers violated their own training by leaving Whitfield face-down after he was restrained.

“Mr. Whitfield, who was in his family home, needed professional mental health care, not the use of excessive deadly force,” the statement from the family reads.

The family said their call to 911 was to request an ambulance to come and help them with getting mental health care for their son. Instead, they said the officers arrived.

The family said they asked about the ambulance, but the officers did not respond to that and instead entered the home and began talking to Whitfield. The lawsuit said Whitfield began walking through the home, unarmed, and that when he went into the dining room an officer deployed a stun gun on him twice. They say Whitfield can be heard yelling “fire,” “fire,” in response to the feeling of the electricity from the stun gun.

The officers then restrained and handcuffed Whitfield, according to the lawsuit. The family said Whitfield can be heard on the bodycam video “gasping for breath and telling the officers at least three times: ‘I can’t breathe.'”

The lawsuit claims after the last time Whitfield said he could not breathe, he stopped moving. It claims officers continued to put weight on Whitfield for another three to four minutes before medics arrived.

The lawsuit explains that officers are trained to not leave arrestees in the prone position and instead to sit them up to help with breathing. The lawsuit claims: “There is widespread agreement in the policing community that prone restraint creates a serious risk of positional asphyxia, and that this risk is exacerbated when officers apply pressure to an individual’s back.”

Once the ambulance crew arrived, the lawsuit claims they told the officers to get Whitfield up off if his stomach. Whitfield was unresponsive and medics started CPR, but Whitfield never regained consciousness.

“Mr. Whitfield died because of the force used against him by the defendant officers,” the lawsuit claims.

The lawsuit is also critical of the city’s mental health response unit, which is only available during some regular business hours and not in the early morning hours when Whitfield was having a mental health crisis.

Whitfield was a composer and pianist. He was even featured in a video by Indy Arts Council in 2009.

According to IMPD, officers were called to the 700 block of Marrison Place, near North Sherman Drive and East 42nd Street, around 3:20 a.m. April 25. A man told officers his son was “having a psychosis” and asked for an ambulance, which was then called to the home.

According to IMPD, Whitfield was bleeding from the mouth and was moving around the home, naked and sweating. Officers lost sight of him several times.

IMPD claims officers used de-escalation techniques, negotiating with Whitfield until he “moved quickly towards an officer.” One of the officers deployed a stun device, but police said Whitfield continued to resist.

Proper IMPD procedure requires officers to give a verbal warning before using a stun gun when possible, then aiming below the chest and heart when pulling the trigger. IMPD originally said one of the stun gun’s probes hit Whitfield in the chest. But in a revised release days later, IMPD said the probe actually hit Whitfield in the abdomen. IMPD said that revised information comes from the autopsy and review of officers’ body-worn cameras.

Data from the stun gun was downloaded and will be used as part of the investigation.

An IMPD public information officer said, “once the man was detained, medics, who had been waiting outside for the scene to be safe to enter, were requested to come inside the home. At that point, medics asked the man to roll over and he did not respond. After medics checked for a pulse, Whitfield was unhandcuffed, and medics and several officers administered CPR.”

Whitfield was taken to a hospital, where he was pronounced dead a short time later.

On May 9, IMPD tweeted a statement about the investigation into Whitfield’s death:

“IMPD continues to investigate the death of Herman Whitfield III. We will release additional information, including body-worn camera footage, once it has gone through all the necessary steps to ensure it can be released to community stakeholders and the public. Until then, IMPD will continue to follow the investigative process while remaining committed to a precedent of transparency set by prior critical incidents.

IMPD has a responsibility to our officers, Mr. Whitfield’s family, and the community to only draw conclusions once all information regarding the investigation has been presented to the Chief and the Marion County Prosecutor’s Office.”

As of June 22, IMPD had not released the bodycam video publicly.

IMPD Chief Randal Taylor told 13News he had no comment on the lawsuit, but that he had heard about it Wednesday morning. 13News also asked IMPD about the status of the officers involved in the incident and is still waiting on a response.