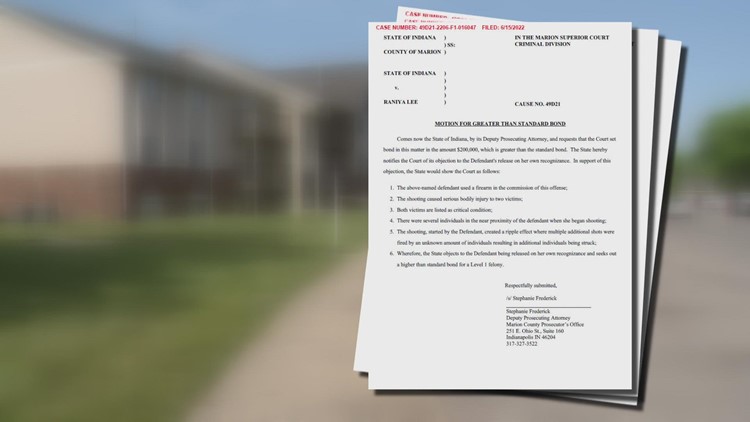 INDIANAPOLIS — Court documents say a shooting at an east side apartment complex last weekend started with a fight outside of a party.

Witnesses told police two women started fighting and ended up on the ground. Police said that’s when another woman, 19-year-old Raniya Lee, shot at the women who were fighting.

According to police, that started a chain reaction of other people with guns shooting too, gunfire from an unknown number of people which led to more people being wounded.

Someone captured video of it all, which circulated on Facebook. The gunshots could be heard on the recording.

According to the charging documents, “at minimum there was at least 40 gunshots heard in the video.”

“I heard the gunshots,” said Richard Jones.  Every single one.

Jones lives in a building across from where it all went down.

“That’s what woke me up out of bed, ’cause my infant was right there,” Jones said.

Jones said he heard the screams.

“I see all these kids running around out here. It was more than 50-some kids that night,” he said.

Among them, four women who were shot.

Police said Lee, the woman alleged to have fired the first shots, showed up later at a local hospital, shot in the hip. Charging documents said she still had a gun with her.

“Inside of the vehicle that Miss Lee arrived in there was a rifle with a drum magazine in plain view in the backseat,” read the affidavit of probable cause, charging Lee with attempted murder and aggravated battery.

According to investigators, another woman also showed up at a local hospital, shot in the leg.

The women who had been fighting were taken to hospitals in critical condition. Police said one of them is paralyzed.

“Bullets, they don’t know no color.  They have no name. You’re firing, you don’t know where it’s going to go,” said Jones, adding he’s just relieved his own family members were not among the victims.

“It was just one of those things where I had to think about my own children,” said Jones.