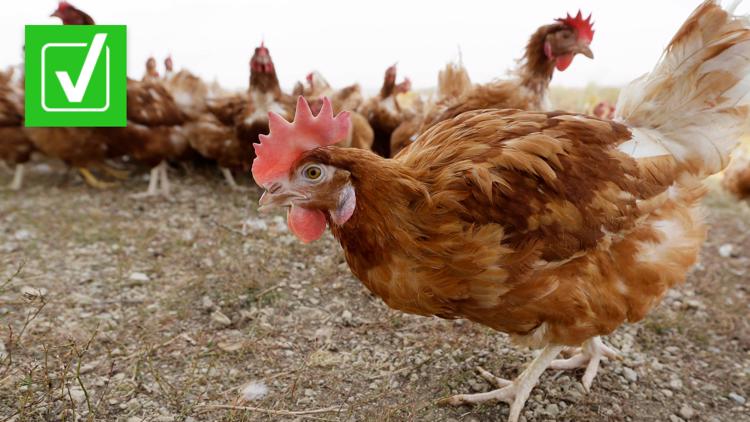 Health officials said the risk to people from this virus is low, as it spreads mostly among wild birds and poultry.

MONTROSE COUNTY, Colo. — A man working on a farm in Montrose County is the first person in the U.S. to test positive for avian flu, also known as H5N1, the Colorado Department of Public Health and Environment (CDPHE) said.

The department said the man is mostly asymptomatic, reporting only fatigue. He is now isolating and taking the antiviral drug oseltamivir (Tamiflu) per Centers for Disease Control and Prevention (CDC) guidance.

The department said the risk to people from this virus is low, as H5 flu viruses spread mostly among wild birds and poultry, and do not normally infect people or spread from person to person.

The CDC said this case does not change the human risk assessment for the general public, which they consider to be low. However, they said, people who have exposure to infected birds are at higher risk of infection and should take appropriate precautions.

H5N1 outbreaks were first detected in U.S. wild birds and poultry in late 2021, the CDC said. So far, the virus has been found in commercial and backyard birds in 29 states, and in wild birds in 34 states.

RELATED: Bird flu in Colorado: How you can protect your flocks

The CDC said they have tracked the health of more than 2,500 people who were exposed to the virus, and this is the only case that has been found.

This is the second reported human case associated with this specific group of viruses worldwide. Public health officials in the United Kingdom confirmed the H5N1 virus in January in a person who had direct contact with infected birds. That person was asymptomatic.

The Colorado man who tested positive was directly exposed to infected poultry through his work at a commercial farm in Montrose County in western Colorado, the department said. The man, who is an inmate at a state prison in Delta County, was working with the poultry as part of a pre-release employment program.

The department said the affected poultry flock has been euthanized and disposed of in accordance with federal and state guidance.

CDPHE said all members of the response team, including other inmate workers, were provided personal protective equipment while working on the farm. Other people involved in the same operation have tested negative for the virus, the CDC said.

CDPHE said they have been monitoring and testing people who are exposed to poultry and wild birds that are infected with avian flu. A test revealed this positive case earlier this week. The department said the positive result was from a single nasal specimen and repeat testing was negative. They said the virus may have been present in the man’s nose without causing infection.

“While it is possible the detection of H5 bird flu in this specimen is a result of surface contamination, that can’t be determined at this point and the positive test result meets the criteria for an H5 case,” the CDC said in a release. “The appropriate public health response at this time is to assume this is an infection and take actions to contain and treat.”

RELATED: Denver Zoo moves birds inside to protect them from avian flu