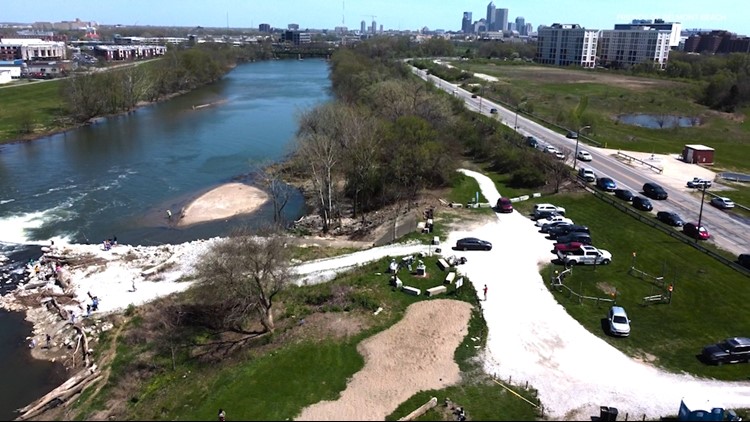 Organizers of the popular riverside pop-up in Haughville look to continue fostering community there well beyond this sophomore season.

INDIANAPOLIS — To be born and raised in the Haughville neighborhood a few decades ago, as longtime resident Mike Treez proudly was, is to have heard a common refrain throughout the entirety of childhood – don’t go down to the river.

For restless kids with bikes though, a small bit of White River tucked behind Bush Stadium provided sanctuary. A heady excess of wild, invasive plants choked out any stadium light flickering onto the waterway, creating a spot where kids could enjoy the river without threat of parental admonishment.

“When I was a kid it was just a space. It was just here, you know. Somewhere you drove past. Seeing people maybe fishing from time to time, but not a lot of it, because they say the river wasn’t so clean,” Treez said.

Today, though, that overlooked shoreline of Treez’s childhood is getting some attention. For the second year in a row, Belmont Beach, the popular Haughville pop-up beach inaugurated ahead of Indy’s bicentennial celebration during the summer of 2021, will continue working to bring families together along the White River’s shores.

“As of right now we’re still a pop-up, fingers crossed that this will be a permanent place for the community. As long as the community keeps enjoying it, this will be there for them,” said Teddrick Hardy, who is the president at Friends of Belmont Beach, a grassroots organization who helped create the pop-up beach.

In it’s sophomore season, dozens of community members affiliated with the organization had their hands on the project, creating a sandy beach by hand or fashioning benches from reclaimed wood, to make the space even better than last year.

“Everything you see out here was built with the community’s hands – with their time and with their treasure. We gather a lot of community resources to be able to buy the things that we needed to get restarted for season two. So, it is truly a labor of love,” said Ebony Chappel, who is the executive director at Friends of Belmont Beach.

Bringing the beach back to Belmont, even after the success of last season, wasn’t a guarantee. Chappel said the organization took advantage of Indiana’s winter lull to hear the community out on what they wanted to experience at the beach. This year’s roster of events reflect what the community wanted – offerings like monthly sound baths, nature hikes, Sunday Fundays, and a Haughville Heritage Day coming up on June 18.

Community members reiterated to Friends of Belmont Beach they wanted a place where families could thrive and spend time together.

“It’s no secret Haughville has always been a family-oriented neighborhood. But now we know the community is invested in it, and they’ve got their hands on it,” said Hardy.

RELATED: Unique boutique hotel coming to Indianapolis’ near west side this summer

People also spoke to the importance of storytelling and sharing the history of Belmont Beach to younger generations. Firepits were organized across the space in response to that need, and offer a place where stories about Belmont Beach and Haughville can be shared with the neighborhood’s younger residents.

“We’ve had a lot of residents, older residents, come and tell us about the days back in the day when it was a fishing spot, and back when they used to swim in the river. Maybe not the healthiest place to swim, but this was the only place they had. So they’re very proud of that history. So, it’s always cool to be able to share that and hear those stories,” said Treez, who is the organization’s vice president.

While the Belmont Beach project may be the first official “pop-up” beach at that specific location, it has gone through ebbs and flows of popularity over the years. In the late 1920s and 1930s, the waters at Belmont provided one of the only spots for Black residents living in legally segregated Indianapolis to swim.

But that area was only permitted as a swimming spot by city officials because of extreme pollution accumulating in that part of the river, according to Friends of Belmont Beach.

“There’s stories back when there was a lot of meatpacking plants here on the west side, that it was so polluted that there were actual dead carcasses of pigs and things floating in the river. So, it was very smelly, very unsanitary, very unsafe,” said Kelly Brown, who is both a secretary and metric program manager with Reconnecting To Our Waterways, an Indianapolis initiative working to improve the quality of life along Indianapolis waterways.

Brown said regulations implemented by the 1972 Clean Water Act helped mitigate pollution in that area, but it continues to this day.

“In the ’90s, there was a big fish kill due to a discharge up river that killed most of the population of fish in the river. But, from that, there was a big settlement that brought a lot of funding to really help revitalize the river. So, that was able to fund some new launches and kayak access. So, people are really starting to see the river as a place of recreation,” Brown said.

Decades later, high levels of E. coli and other contaminants prohibited Haughville organizers from placing a beach right up against the water. But the White River’s ongoing pollution woes did not deter them from creating a community space at Belmont Beach once again.

RELATED: What’s that in the water? Rare white dolphin makes appearance in Clearwater

“When we say ‘beach,’ it’s really aspirational. Because one day, in the future, we do hope to be able to spend more time down there and really enjoy it. In the meantime, what we’ve been doing is encouraging people to use the water safely,” Chappel said.

Organizers said they were intentional about incorporating a green mentality within the site’s construction so wildlife making their way in the area – blue herons or red-shouldered hawks that weren’t around when pollution was at it’s peak – could call the space home.

“I think the quality of life for everyone involved in the space, from humankind to animalkind, has been enhanced with us being down here and people just paying more attention to the river. And trying to be more cognizant of what they put in a river,” Treez said.

While the goal of actually swimming in the water at Belmont Beach could be years off, the one of crafting a place where community could come together once again has already been attained.

“They say it’s a pop-up park, but we popped back up. And Lord willing, we’ll pop back up again. And we’ll keep popping up, you know, until it’s a permanent space,” Treez said.

For more information on how to volunteer at Belmont Beach or participate in sound baths, nature walks and more click here.