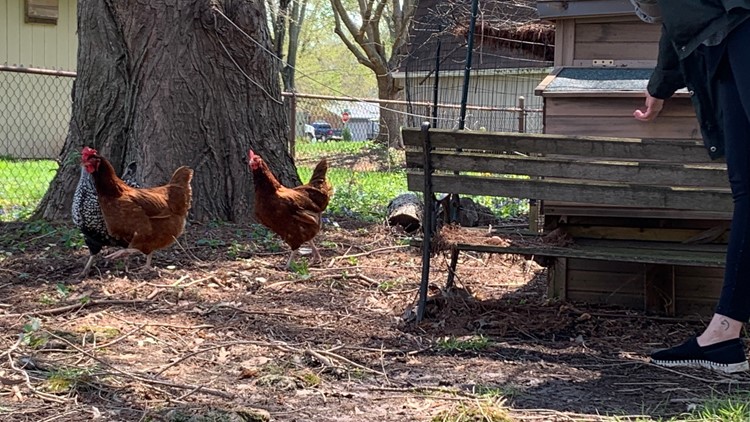 JOHNSON COUNTY, Indiana — A bird flu outbreak has now made its way to central Indiana. The virus, which already decimated commercial chicken farms in other parts of the state, has now been found in a small backyard flock near Bargersville.

Backyard flocks are becoming more common in Johnson County, and now they could be in danger as the avian influenza outbreak continues to spread.

A backyard flock near Bargersville tested positive this week. The birds infected include 41 chickens, ducks, and peafowl. Many got sick and some suddenly died.

“Sometimes they have respiratory coughing, sneezing. They may get lethargic, quit eating, get diarrhea. A lot of times they will get a purplish color to their head around their eyes and swelling,” explained Denise Derrer-Spears, a spokesperson for the Indiana State Board of Animal Health (BOAH).

This flock joins nine Indiana commercial poultry farms that have been hit by the flu, including three northern Indiana duck farms and six turkey farms in southern Indiana’s Dubois and Greene counties. The birds at those turkey farms were destroyed.

In the coming days, the BOAH will begin testing for potential infection in flocks near the infected Johnson County farm, just to be sure it hasn’t spread.

Currently, the affected area in Johnson County does not include any large commercial operations.

Bird flu is spread to poultry by droppings from wild birds, especially geese and ducks, which makes it especially difficult to contain and control.

To mitigate the danger, experts say be careful not to track the pathogen onto your property and into the coop.

“Since it’s from droppings, you could literally step in it somewhere else and walk it onto your property. That’s one of the reasons we recommend you have a special set of shoes and just keep them right there and put them on before you go into the chicken yard or the barn area,” Derrer-Spears said. “Have that special set of shoes or boots and clean and disinfect them.”

Also, keep chickens away from retention ponds or streams, to limit contact with wild birds and call the vet if you notice any sign of sickness.

RELATED: Protect your flock from avian flu with these steps

There are a lot of misconceptions about bird flu.

Derrer-Spears gets those questions a lot. So here’s some myth-busting.

“Avian influenza is not a food safety issue. Your eggs and your poultry, your chicken meat, your deli turkey, all of that is still safe to eat so people should go ahead and enjoy that,” Derrer-Spears said.

Health officials say avian influenza does not present an immediate public health concern, there’s an extremely low risk of infection and no human cases have been detected in the U.S.

Plus, there’s no need to bring bird feeders indoors, since birds that carry the disease (geese, ducks, hawks) don’t use them.

But for chickens, bird flu is a risk right now.

“If they see something in their birds, take the time to call, it’s really important,” Derrer-Spears said.

MORE: Information about avian influenza and how to contact BOAH if you need testing or suspect your chickens are sick.

So far, more than 200 sites across 29 states have found cases of bird flu affecting chickens, turkeys and ducks. According to the United States Department of Agriculture, 36 bald eagles in 14 states have died from the virus since February.

It’s particularly troublesome for Indiana, since our state is a big poultry producer. Indiana is number one for ducks, number two for eggs and number three for turkeys nationwide.