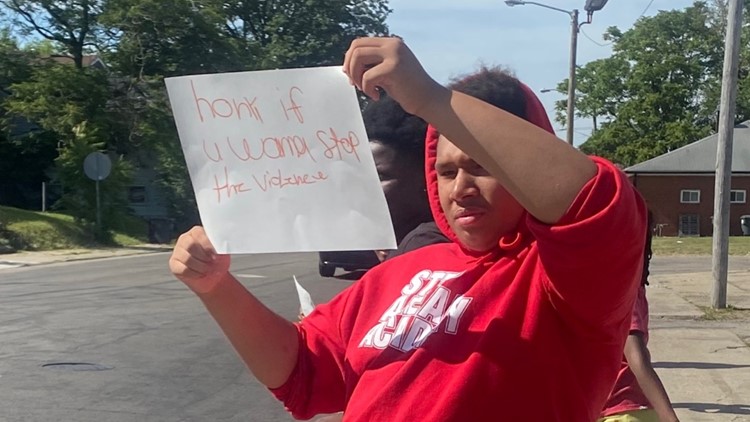 Even though the violence didn’t happen in his city, the group’s organizer said he wanted to help.

ANDERSON, Ind. — On Monday, Cease Fire Indy and The Village Project traveled to Anderson to raise awareness and connect with the community after a violent weekend there.

Even though the violence didn’t happen in his city, he still wanted to help. He said he hopes it encourages others to get involved.

“I feel like if nobody else is going to do it, I guess I can start it. Then once I start it, I feel like a lot of people will follow,” he said.

A deadly shooting happened early Sunday morning during a series of incidents in the area of 16th Street and Madison Avenue.

According to 13News’ partners at the Herald Bulletin, the dead man was identified as 24-year-old Landon Hill. He was one of three people found shot around 3:30 a.m.

The triple shooting was the second violent incident of the morning.

Around midnight, officers were called to the same area and located two people with gunshot wounds.

The two shootings happened at the same spot where the community was hosting a weekend-long Juneteenth celebration.

“I hate that it happened here in our city,” said Donisha Poole, who lives in Anderson.

Poole said the weekend activities were supposed to be a positive event for the city, but instead, the violence left a family grieving.

“It distracts, and it takes from the positive things we are trying to do to keep out the violence,” she said.

It’s why she’s encouraging others in her city to get involved, hoping rallies like the one on Monday will build more unity within the community.

“We need to take our communities back, and the only way to take them back is by spreading love,” Gee said.

As of Monday afternoon, one of the four people wounded was still in serious condition at a hospital. The other three have been released from hospitals.