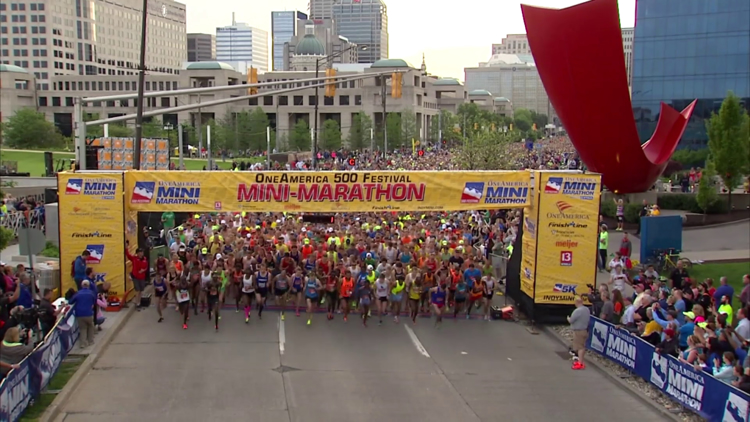 It’s an in-person event this year after being held virtually during the pandemic.

INDIANAPOLIS — Thousands of participants are getting ready for weekend’s OneAmerica 500 Festival Mini Marathon.

It’s an in-person event this year after being held virtually during the pandemic.

Aroos Naeem was picking up her race packet Thursday at the Indiana Convention Center.

“I’ve been training for only two months, but you know what? I’ve hit 14 miles four times, so hey, let’s do it,” she said

It’s Naeem’s first time running the Mini and she said she’s as ready as she’ll ever be.

“I have a playlist. Spotify all the way. It’s going to be Eye of the Tiger, Rocky. I have Mortal Combat. I have to say, a lot of fun stuff,” she added.

Naeem is one of about 20,000 people who will flood the Indiana convention Center over the next two days to find their name on a banner listing all the participants while picking up the race number they’ll be wearing when they start and cross the finish line.

“We’ve got a good mix of people that have been running since the beginning,” said Lindsay Labas with the 500 Festival. “We’ve got some people who have done every single Mini-Marathon. We have some people, this is their first time, so we have all walks of life coming and I think that’s one of the coolest parts about this event. It’s really not a competitive race. It’s all about the experience of getting out and having fun.”

“This is my third time running the 5K,” said Retha Swain.

She will be celebrating Mother’s Day a little early, running with her daughter, Rilyne.

Many preparing for Saturday told 13News it’s good to be back. Two years away has been too long and the course is calling.